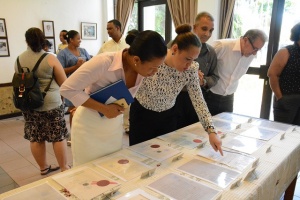 The exhibition showcases the different civil commissioners and governors who worked in Seychelles from 1811 to 1976. (Jude Morel, Seychelles News Agency)

(Seychelles News Agency) - Have you ever wondered what Seychelles would be like today if it had not been under British colonial rule? An exhibition that opened Thursday at the National Archives might help you with the answer.

The exhibition showcases the different civil commissioners and governors who worked in Seychelles from 1811 to 1976. The period was chosen because it was an important one in terms of structural development and economic growth for the island nation.

Ruby Valentin, the assistant archivist, said that it was also during the early 18th century that the term civil commissioners were used.

“We have showcased all civil commissioners and governors who worked here when we were under administration. Some of them have made significant contributions," Valentin said.

Many of the British civil commissioners and governors in that period were credited with having played a big role in transforming the lives and improving the standard of living of the islanders. These included the buildings of dams and water reservoirs, hospitals and other infrastructures. They also helped with social reforms and reform in the justice system such as the abolition of the death penalty.

The names highlighted are Ernest Bickham Sweet Escott, responsible for education reforms in 1903; Edward Davidson, who commissioned the building of the Governor’s House today known as State House; Joseph Alloysius, who was in office in 1926 when Victoria first got electricity; Percy Selwyn Clarke, who opened the first Seychelles College; and Gordon James Lethem, who had the clock tower painted in silver.

The last serving governor was Sir Collin Hamilton Allan, who appointed the late James Mancham as Prime Minister when Seychelles, an archipelago in the western Indian Ocean, gained independence in June 1976.

The National Archives says that through this exhibition they are raising awareness on how rich the Seychelles history is and encouraging students to make use of the service, which is a gateway to research on the Seychellois people and their islands.

The exhibition is open until the end of March.