China donates $11 million to Seychelles, including for renewable energy projects 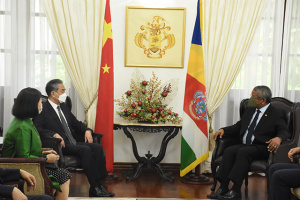 The Chinese government has given Seychelles $11 million, including $4.6 million to help with a project that will help the country generate more renewable energy.

The grant is part of an agreement which was signed on Saturday at State House between Seychelles and China, represented by their State Councilor and Foreign Minister, Wang Yi, who was in the island nation on an official visit.

The Minister of Agriculture, Climate Change and Environment, Flavien Joubert, told the press that the project will have different components that have to do with renewable energy.

"Some are off-grid. For example, we have been talking about Curieuse Island becoming autonomous in terms of energy. Under this project, we would be able to do so," said Joubert.

Another component of the project is to install solar panels on public buildings such as state schools, which will reduce their energy consumption.

Joubert said that discussion has also focused on other engagements that China has towards countries like Seychelles – 115 islands in the western Indian Ocean.

"The two countries are oriented towards the same issues such as climate change and environment. China is now focusing on a greener and more durable development. It is the same for Seychelles as we cannot go for rapid development as it will bring destruction to the environment," said Joubert.

Yi’s one-day visit to the island nation was the final leg of his five-day official tour of five African countries. His Seychellois counterpart, Minister Sylvestre Radegonde, said that the aim of the visit is partly to show solidarity towards Seychelles, which is also struggling with the pandemic.

"We also took the time to discuss our bilateral issues such as projects that are still undergoing. There are also some new projects that we have proposed to them," said Redegonde.

Radegonde said he was grateful that $155,000 of the grant money will go directly to the Ministry of Foreign Affairs and Tourism.

A direct flight from China to Seychelles was also discussed. "More than a million tourists are travelling every year to different countries around the world. Just next door to us, Madilves, receives around 300,000 Chinese every year. The only advantage is that Maldives has a direct flight with China," said Radegonde.

Yi and his delegation were to depart Seychelles on Saturday. Before coming to Victoria, Yi visited Nigeria, the Democratic Republic of the Congo, Tanzania and the Southern African country of Botswana.