State House in Seychelles is connected to solar; plan for three gov't branches to go green 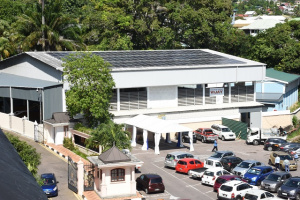 The 90-kilowatt solar panel was installed on the nearby Victoria Gymnasium. (Patrick Joubert)

(Seychelles News Agency) - Seychelles' State House will save on electricity bills now that it is connected to a 90-kilowatt solar panel installed on the nearby Victoria Gymnasium.

Three solar panels were placed on the Victoria Gymnasium as "State House building is considered to have certain heritage aspects so this is why they were not installed directly there," the Minister for Environment, Energy and Climate Change, Wallace Cosgrow, said at the inauguration ceremony on Friday.

The installation of the panels is part of the project democratisation of solar photovoltaic systems in Seychelles through a $3.44 million grant from the Indian government.

"We said that we would instal solar panels on the roofs of the three buildings that represent the three branches of the state - the National Assembly, State House, and the Supreme Court - so that these institutions can be seen as good examples," said Cosgrow.

Solar panels were successfully installed on the National Assembly building last year and are yet to be installed on a judiciary building as it cannot be done on the Supreme Court's roof.

Aside from the National Assembly building, solar panels have been installed at the Ministry of Health and the transit home at Barbarons in Grand Anse, a western district on Mahe.

Apart from the instant benefit of reduced electricity bills, Cosgrow said that the installation of solar panels will contribute to the country's plan "to bring more solar energy into our grid in Seychelles."

Seychelles, a 115-island archipelago in the western Indian Ocean, has an energy policy 2010-2030 as a guide towards reducing consumption of fossil fuels by 15 percent by 2030.

The chief executive of the Public Utility Corporation (PUC), Philippe Morin, told SNA that at the moment, close to 3.5 percent of energy in the power grid comes from renewable energy.

"Once we complete the five-megawatt project on Ile de Romainville, the one-megawatt being installed with the assistance of the Indian grant and the four-megawatt solar farm in the Le Roche lagoon, we will get close to five percent of renewable energy," said Morin.

Cosgrow said that energy produced from the Ile de Romainville farm, expected to be commissioned next month, will cater for about 500 households that are considered as vulnerable.