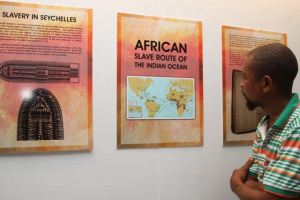 (Seychelles News Agency) - In a bid to further preserve its rich history and heritage, Seychelles has joined UNESCO’s Memory of the World programme. An inventory of all institutions with documentation of historical and heritage value is the first exercise that will take place.

Seychelles is the third of 13 countries in the region to benefit from a capacity building session on how to better preserve its documentary heritage. Led by the United Nations Educational, Scientific and Cultural Organisation (UNESCO) the programme was initiated in 1992.

It aims to empower countries with tools to identify, preserve and access documents so as to better document the collective memory of heritage to put them on a national register for present and future generations.

“Memory of the World is to sensitise the world on the importance of preserving the documentary heritage and to allow access to it. Documentary heritage was increasingly being destroyed by war, natural causes like acidification of paper and lack of resources to preserve documents,” explained Odile De Conmarmond from the Ministry for Education, which is host to UNESCO's secretariat in Seychelles.

De Comarmond added that “documentary heritage represents the common heritage of mankind which needs to be preserved for present and future generation.”

John Okande, ‘Memory of the World’ expert from the UNESCO regional office based in Nairobi, Kenya was on the island recently to start the programme.

“National heritage memory register creates international recognition for the host country as the heritage documents are items of value to nations as they inform us on how we plan and grow as a country for the future and also on how we relate to one other,” explained Okande.

Okande added that he was happy to note that Seychelles – 115 islands in the western Indian Ocean -  is the third country after Uganda in 2018 and Kenya in 2016 to embark on this initiative.

A first of its kind for Seychelles, the training for managers of memory institutions of documentary heritage was organised in collaboration with the Seychelles National Commission for UNESCO under the Ministry of Education and Human Resource Development (MEHRD).

In attendance were archivists, librarians, and documentalists from ministries, agencies, entities and other professionals working in conservation and heritage.

Vicky Gendron of Seychelles National Commission for UNESCO, said as a next step the committee will be engaging with the community to educate people about the importance of preserving and allowing access to documentary heritage,” said Gendron adding that this will also, be held on the two other main islands of Praslin and La Digue.

Historian Tony Mathiot said that “even if Seychelles has a big set back in terms of its National Archives closed because of a fungus outbreak, I am confident that the inventory will allow us to gather valuable memories of the islands being kept at different locations.”