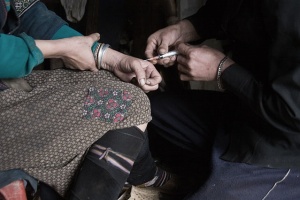 HIV is increasing in the drug user groups, those who use syringes. (Wikimedia Commons) Photo License: CC-BY 2.0

The way HIV is transmitted is changing in Seychelles from a sexually transmitted virus to one passed on among drug users, an official at the Ministry of Health said.

“Before, we considered HIV to be transmitted mainly between men and women. For the past five years, we have found that this is no longer the case - HIV is increasing in the drug user groups, those who use syringes,” said Sabrina Mousbe, the HIV/AIDS programme manager at the Ministry of Health.

Mousbe spoke to the media on Friday during Seychelles’ participation in the International AIDS Conference held in Amsterdam, Netherlands, from July 23 to 27.

The conference, which is the largest on any global health issue in the world, was first convened during the peak of the AIDS epidemic in 1985. It continues to provide a unique forum for the intersection of science, advocacy, and human rights.

According to the epidemiology report of 2012 to 2016, 30 percent of the cases in Seychelles are believed to be drug users who are also co-infected with Hepatitis B and C.  Seychelles, with a population of 95,000, had 895 HIV infected inhabitants and 314 living with AIDS at the end of 2017. The same year, the island nation recorded 95 new HIV cases.

Other population groups considered to be more likely to be infected by HIV are sex workers and men who are sexually engaged with other men and the youth.

“These are the groups that are being more affected but are not necessarily being addressed in the proper way,” said Anne Gabriel, the chief executive of the National AIDS Council.

The theme of this year’s conference was “Breaking Barriers, Building Bridges”, drawing attention to the need for rights-based approaches to more effectively reach key populations.

Seychellois delegates said that it was outlined at the conference that no country is doing enough to reach the ‘zero new HIV infection by 2030’ target. Some countries have a lack of human resources and qualified people and or a lack of funding among other issues.

“Before organisations such as WHO (World Health Organisation) and UNAIDS were funding countries but during the past years these funders are pulling out. On the other hand, it has been found that the governments of countries are injecting more funds into their programmes but doesn't mean that it is enough,” said Mousbe.

“Another constraint is that Seychelles is now considered a high-income country. This means that organisations that used to fund Seychelles are not doing so as they think that the country can depend on itself to address HIV,” she added.

The seven-member-Seychellois delegation also learnt about new technologies that have not yet been introduced in the island nation. These include the HIV self-test which comes in two forms -- one that health professionals can use and another that the person can use at home.

Mousbe said that the ministry is being she encouraged to purchase these tests as they are “easier to use them, reliable and cost-effective.”

She explained that currently doing an outreach programme means having two or three nurses, a lab technician, syringes, needles and reagents.

“If we are to use the new kits, instead of withdrawing blood, we swab the upper and lower gums of a person’s mouth which are then placed in a solution for between 15 to 20 minutes to get the result,” said Mousbe.

Getting the results in such a short time might encourage more people to come forward to get tested and it will be easier to reach certain groups of the population said Mousbe.