HIV/AIDS cases more common among men in Seychelles because of drug use, sex 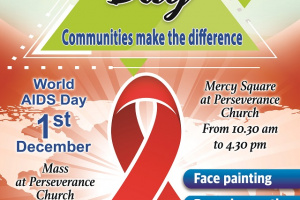 Seychelles will join the rest of the world on Sunday to commemorate World AIDS Day. (Ministry of Health)

(Seychelles News Agency) - HIV/AIDS cases in Seychelles are more common among men, a fact attributed to factors such as intravenous drug use and men having sex with men, said a top health official.

"Every year I am asked the same question about why HIV is more common among men. ... This might be attributed to the number of men injecting drugs through their veins," said Anne Gabriel, the chief executive of the National AIDS Council.

Gabriel said that another factor is "related to men having sex with other men. When we also look at figures gathered on inmates in the prison, it reveals the same pattern."

With the increasing number of drug users in Seychelles, an archipelago in the western Indian Ocean, the fight against HIV/AIDS is becoming even more complicated.

A study called the 'Seychelles Biological and Behavioural Surveillance of Heroin Users of 2017' showed that 5.6 percent of the population aged 15 years and above are heroin users.

In a presentation in October last year, the secretary of state for the prevention of drug abuse and rehabilitation, Patrick Herminie, said that the drug situation in Seychelles is clearly a menace to the country.

"More than 10 percent of our working force is not able to work as they are abusing drugs and many of them are also being affected by other diseases such as HIV, Hepatitis C, and other complications," said Herminie.

The National AIDS Council is working in partnership with a newly set up drug reduction agency to offer more tests and treatments.

"We are getting them tested and started on HIV treatment, train peer educators to support those on treatment and advocate for Hepatitis treatment for all those who are infected," she told SNA.

She added that the Council has "introduced better testing services for prison, improved the availability of harm reduction services such as Methadone and needle exchange, and we are now able to better access people who inject drugs."

HIV -- human immunodeficiency virus -- attacks the body's natural defence system and as a result, the body cannot fight infection and disease. AIDS, which stands for acquired immune deficiency syndrome, is the final stage of infection with HIV. Not everyone with HIV develops AIDS.

The chair of the HIV AIDS Support Organisation (HASO) Justin Freminot told SNA that the organisation is providing counselling services to people living with AIDS and those who are HIV positive.

The organisation has joined other groups in a bid to remove legal barriers through discussions including the members of the National Assembly.

To date, Seychelles with a population of 95,000 has 843 people living with HIV and AIDS.

Seychelles is also putting more emphasis on the prevention of pregnant mother passing on the infection to their child. This year there were seven HIV positive mothers but only one child was born with the virus.

"We encourage all woman when planning to get pregnant to know their status. However, if a mother is HIV positive, the baby is always at risk if the mother is not taking its treatment accordingly," said Gabriel.

Seychelles will also be introducing the HIV/AIDS self-test system next year.

On Sunday December 1 in commemoration of World AIDS Day various activities to raise awareness will be organised at the Mercy Square opposite the Holy Spirit Church at Perseverance, a man-made island.