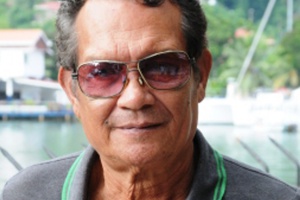 (Seychelles News Agency) - A resident of Anse Boileau, in the Western part of the main Seychelles island of Mahé Jack Yokowo is thought to be amongst very few musicians on the island who play the Hawaiian steel guitar.

Yokowo is not really a common Seychellois name, proven by the fact that Jack was born of a Japanese father Tamosu Yokowo while his mother Raymonde Camille originates from La Digue the third most populated Seychelles island.

In an article published today, daily newspaper ‘Seychelles Nation’ describes Yokowo as someone who had a passion for music having played in a number of bands.

‘Mickey and the Buccaneers’, ‘Pat et ses ombres’ and more recently Country and Western band ‘The Amigos’ are some of the groups that Jack has formed part over the years.

Together with fellow musicians Jack playing mostly the guitar have been seen entertaining popular night spots across the island as well as musical concerts.

It’s his skills on the Hawaiian steel guitar though, that is thought to have brought him the most respect and admiration.

In an article for the Up Close page of the Seychelles Nation issue of February 19, 2013, John Lablache wrote that “Jack is probably most revered for his skills on the Hawaiian steel guitar, a feat that not many Seychellois can lay claim to. In fact, it is highly probable that Jack was the only Seychellois who played this instrument…”

Born May 15 1949 Jack Yokowo joined the Seychelles Government Survey Division after his studies which later earned him a cartographer’s course in Surrey, in the UK.

The passionate musician moved to Montreal, Canada at some point after getting married in the 1980’s but returned to Seychelles after 9 years.

The 65 year old veteran Hawaiian steel guitarist who passed away yesterday is the father of two daughters – Marcia and Lyn – and a son also called Jack.

He also has 5 siblings, one brother and four sisters, one of which is a nun, of the St Joseph of Cluny congregation, Sister Bernadette Yokowo.

This is a Roman Catholic Missionary Congregation established in France early in the 19th Century by Anne Marie Javouhey.

In 2012, Sister Claire Houareau became the first Seychellois to be elected superior general of the congregation of the sisters of St. Joseph of Cluny.