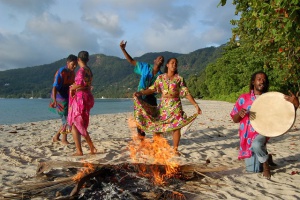 The need to create a platform aimed at promoting the Seychellois culture deviates from the observation of many that modernity and globalization has slowly taken over what was once a way of life. (Gerard Larose, STB)

(Seychelles News Agency) - Providing a platform that brings together people who are passionate about promoting the Seychellois culture is the main objective of the newly launched 'Patrick Victor Cultural Foundation,’ a foundation named after a well-known Seychellois singer, musician and songwriter.

“This is the end result of something that a group of people started to discuss a few years ago and it has finally come to the point of realization,” said Victor, who is also the patron of the foundation.

“It was suggested that the platform should bear my name as I am well-known among the population. However it’s not about the name but more about the vision we all have to see the emancipation of our culture,” he added.

The Seychelles islands are inhabited by descendants of African, French, British, Indian and Chinese settlers which makes up the islands' diverse creole nation. Victor explained to SNA that the need to create a platform aimed at promoting the Seychellois culture deviates from the observation of many that modernity and globalization has slowly taken over what was once a way of life.

Speaking at the launch ceremony on Friday, Emmanuel D’Offay, chairman of the Patrick Victor Cultural Foundation, seeks to encompass everything that relates to the Seychellois culture – be it the music, art, dance, history, the Seychellois hospitality and way of life among others.

“It is a private organization that wants to give a helping hand to the government specially the ministry of tourism and culture, the ministry of education, youth department and all stakeholders in taking our culture to the next level."

According to Victor there are many factors including the modern trends that are contributing to the fading of the Seychellois culture.

He also said that most of the social ills faced by the island nation today can also be attributed to the fact that people are abandoning their cultural values.

"There is a serious need for reflective debates, sharing of knowledge and analysis to know exactly who we are. As a foundation we feel that we can help with this endeavor," said Victor

Some of the activities envisaged include getting people interested at a district level to have exchanges or imparting of knowledge, getting into the schools and even having exchanges with people from other countries on how to preserve such cultural heritage.

“We have started some meetings to sort of have an inventory to see who can still share their knowledge on any aspect of the Seychellois music, the moutia, art, dance, musical instruments story telling among others,” said Victor.

The Seychelles Minister for Tourism and Culture Alain St Ange has welcomed the initiative as one where the private sector is taking ownership of something of which they are part and parcel.

"Together we must pave the way to give culture this ability to progress, to grow, to establish itself as the industry that represents the people of Seychelles," said St. Ange

One of the first gestures of the foundation was to honour a group of Seychellois who have made substantial contributions in promoting the Seychelles culture throughout the years.

As a sign of appreciation for their dedication, these people have been appointed honorary members of the foundation.

One of the people recognized is Marie-Therese Choppy one of the pillars in the promotion Creole -- the native language of the Seychellois people.

“I believe the recognition is for my efforts in promoting the Seychelles culture especially to develop the creole language ….I have also been involved in other thing including writing of many plays,” Choppy said to SNA.

Commenting on the foundation Choppy said: “I believe such an initiative is very important as we are a small country and amidst globalization we can sometimes lose what is truly ours and find ourselves imitating other cultures. It is a way of preserving our tradition and other cultural values for tomorrow’s generation.”

According to Victor while the foundation aims to impact all age groups -- from children to the older generation, application for those aged 17 and above wishing to become affiliated members of the foundation will be open as of next week.