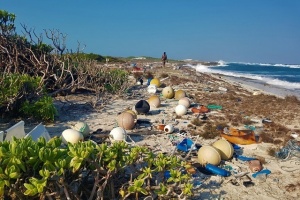 Payet called the agreement “historic” as it allows countries to monitor where plastic wastes go when they leave the border of each nation.(Seychelles Islands Foundation)

Seychelles is one of 187 countries that approved a United Nation’s plastic waste pact aimed at reducing pollution from plastic waste.

The legally binding framework is the result of a meeting held in Geneva, Switzerland from April 29 to May 10 to discuss the UN Basel Convention on the Control of Transboundary Movements of Hazardous Wastes and their Disposal.

Negotiations brought together 1,400 delegates. Seychellois Rolph Payet, of the United Nations Environment Programme, was part of the team leading the move.

Payet called the agreement “historic” as it allows countries to monitor where plastic wastes go when they leave the border of each nation.

Amendments were made to the Basel Convention to include plastic waste in the framework which will put in place a more accountable and transparent system for plastic waste trade, including recycling. This will also ensure that the management of plastic waste is safer for human health and the environment.

“If the importing country does not want the waste, then it can refuse to accept the waste under the convention. Countries are also encouraged to establish national legislation as well and will be expected to sort out and clean their plastic wastes before exporting,” said Payet.

More measures are expected to be negotiated in future meetings, as this is the first step in tackling global plastic wastes making its way into oceans.

The director general at the waste enforcement and permit division at the environment ministry, Nanette Laure, told SNA that in view that Seychelles has signed the Basel Convention, there are procedures in place that need to be followed prior to exporting.

“Prior informed consent is also sought from the receiving authority of the particular country. The Environment Department needs to inspect any container prior to leaving the Seychelles so that formal approval is then given and the forms are endorsed,” said Laure.

Seychelles currently has a recycling scheme in place for PET bottles where such are collected, redeemed and exported, mostly to Ukraine. The 115-island archipelago in the western Indian Ocean imposed a ban on the importation of single-use plastic in 2017.

The new provisions added to the convention will be enforced in a year from now and Payet noted that “industry is already reacting as this is a short time to put in place their own arrangements to comply.”

Payet referred to plastic pollution as an “epidemic”, with “an estimated 100 million tonnes of plastic now found in the oceans, 80 to 90 percent of which comes from land-based sources”.

He commented that the pact is “sending a very strong political signal to the rest of the world - to the private sector, to the consumer market - that we need to do something.”

“Countries have decided to do something which will translate into real action on the ground. No more dumping of plastics wastes, the need to find alternatives to single-use plastics and packaging, the need to improve design for better recycling and recovery of plastics,” elaborated Payet to SNA.

On her part, Laure said that for the island nation the pact will provide guidance on how hazardous waste is to be managed and transported.