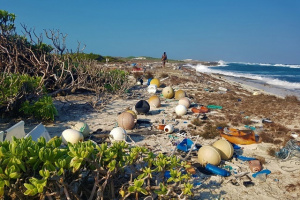 Supporting the participation of regional seas countries in the negotiation of the global agreement on plastics is on the agenda at a meeting of the UNEP Regional Seas Strategic Directions (RSSD) programme currently taking place in Seychelles.

The United Nations Environment Programme (UNEP) meeting officially kicked off the implementation of the RSSD in its 2022 annual meeting from May 25 - 28 at the Eden Bleu hotel.

In her opening address on Wednesday, the Director of the Ecosystems Division at the UNEP, Susan Gardner, said that the strategic directions set an ambitious path to achieve the UN's Sustainable Development Goal 14, which is about the conservation of the oceans.

"The strategy provides an opportunity to align the regional seas work with global commitments and targets agreed at regional and global level," she said.

The strategic directions will track the Regional Seas Programmes' achievements at the national and inter-regional levels through a three-year framework.

At the annual meeting, participants will also look at supporting the participation of regional seas countries in the negotiation of the global agreement on plastics.

At the fifth session of the United Nations Environment Assembly, member states endorsed a historic resolution to end plastic pollution and forge an international legally binding agreement by 2024.

"This resolution has set the ball rolling for an ambitious target for an international legally binding instrument on plastic pollution, including in the marine environment, which could include both binding and voluntary approaches, based on a comprehensive approach that addresses the full life cycle of plastic," said Gardner.

The importance of international treaties will also be looked at during the annual meeting.

Seychelles' former environment minister and the current Executive Secretary of the Basel, Rotterdam, and Stockholm Conventions, Rolph Payet, said that "most countries have realised that voluntary actions and talks are not enough. Actions need to be taken and this is where international treaties become very important."

He said that the Basel Convention made a significant amendment where it banned exportation and gave countries the power to make vessels coming in to dump waste to turn around.

"This brought shock waves through the industry and today they are holding discussions on national levels on how to stimulate new forms of companies that will do more recycling, recovery, and put in place systems that will reduce the effects of waste on the environment," said Payet.

He added that the EU has launched the Green Deal that will look at a circular economy, meaning that a product placed on the market will be tracked until it comes to the end of its lifespan. Instead of being thrown away, it can be returned to the company where it was made or to a facility where the product can be taken apart, recycles, and reused.

During the meeting, the strengthening of ocean governance through strategic partnerships will also be covered.

Seychelles' environment minister Flavien Joubert spoke of the efforts that his country, a group of 115 islands in the western Indian Ocean, has taken in its commitment to ocean protection.

"We have already declared 30 percent of our Exclusive Economic Zones as Marine Protected Areas, which already exceeds the 10 percent protection by 2020 commitment under Sustainable Development Goal (SDG) 14.5. We are now in the phase of implementation of the Marine Spatial Plan, where dedicated budgets are required for the effective management of the protected areas," said Joubert.