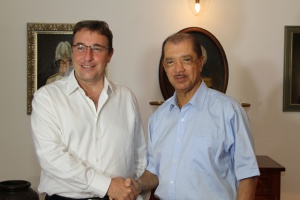 The Executive Director of the United Nations Environment Programme (UNEP), Dr Achim Steiner, has hailed the 115-island archipelago of Seychelles’ commitment towards the sustainable management of its resources.

“The challenge of sustainability is one that the Seychelles has embraced and this is also the heart of the mission of the United Nations Environment Programme, so we are not only historical partners but even more excited and keen partners for the future,” he told members of the local press on Tuesday.

Steiner paid a courtesy visit to Seychelles President James Michel at State House, situated in the archipelago’s capital of Victoria as part of his programme during the Nairobi Convention for Protection, Management and Development of the Marine and Coastal Environment of the Western Indian Ocean.

The Nairobi Convention, which was adopted here in Seychelles 30 years ago, marked the anniversary with the 8th Conference of Parties (COP8) in very the same country in which it began.

The members of the Nairobi Convention range from the Horn of Africa to the continent’s southernmost tip and spans out into the western Indian Ocean, including Comoros, France (through its department island of Reunion) Kenya, Madagascar, Mauritius, Mozambique, Seychelles, Somalia, Tanzania and South Africa, all of which were represented at the opening ceremony at the Savoy Hotel on the beach resort of Beau Vallon in the northern area of the Seychelles' main island of Mahe on Tuesday.

The Convention started off in 1985 with two protocols, one concerning cooperation in combatting marine pollution in the Eastern Africa region and the other related to protected areas for wild fauna and flora. The protocols were later revised and a new protocol on the protection of the coastal and marine environments from landbased sources and activities was added.

The 8th Conference of Parties of the Nairobi Convention saw the Seychelles Minister for Environment and Energy, Didier Dogley, take over the rotational chairmanship of the Convention from Tanzania for the next two years.

One of the healthiest marine zones

Dogley said the Western Indian Ocean is host to a wide range of biologically and ecologically significant areas, veritably teeming with life.

"It is home to one of the largest seagrass beds, thousands of kilometres of productive coastline and many underwater structures and seamounts. All these, coupled with the current of the Mozambique Channel, renders the Western Indian Ocean very rich in fauna, flora and marine resources."

Also speaking at the opening ceremony, Steiner had described the Western Indian Ocean, "one of the healthiest marine zones in the world".

He remarked however, that it can be affected by environmental pressures such as coral bleaching, pollution, overfishing and maritime transport.

In an op-ed published by SNA on Tuesday, Steiner and Dogley had said the western Indian Ocean remained one of the least polluted marine areas in the world due to the foresight of its regional leaders.

Dogley also spoke of the need for more research and awareness of what lies beneath the surface of the ocean, saying that without adequate data and interpretation, no management or preventative actions could be taken.

“Our understanding basically ends at the beach, or some of us maybe if we go fishing, we will understand how to catch a fish, but what is really happening deep down we have limited knowledge,” he said.

Dogley expressed hope that the climate change conference in Paris at the end of this year would produce a new binding agreement to replace the Kyoto Protocol and "save us from the brink of disaster."

"Planet Earth needs all the champions it can get. So let us hope other major religious leaders will follow his example,” he added.

In order to enable the implementation of the Blue Economy concept, which focuses on the sustainable management of the ocean’s resources, Seychelles is currently in the process of completing a climate change adaptation debt swap initiative, which includes the development of a countrywide Marine Spatial Plan (MSP) for its entire Exclusive Economic Zone (EEZ).

Dogley told the delegates that the debt swap’s locally-managed trust fund will finance the MSP, which will protect an area covering 30 percent of Seychelles' almost 1.4 million square kilometres of EEZ.

In an interview with SNA in June 2014, Dogley had noted that presently only 1 percent of Seychelles' EEZ are protected as no-take zones, way below the minimum of 17 percent set by the Convention on Biological Diversity (CBD).

The main ones are around the Ste Anne group of islands, about 3 km from Victoria, Bay Ternay off Mahe' western coast and around Curieuse Island, near Praslin.

During Steiner’s visit to State House, he and President Michel discussed issues of mutual interest and areas of cooperation in renewable energy and the Blue Economy concept, and the President wished all the parties a successful outcome for the convention.

"It is a pleasure to have you with us and we are looking forward to having a fruitful exchange,” the President was quoted as saying in a press statement released on Tuesday. “It will be an opportunity for you to see yourself what we are trying to do here in Seychelles, of course we still have a lot of improvements to make, it is not always easy to try and establish the proper balance between development and the management of the environment. But, we try to do the best that we can and we need a lot of support also, in terms of capacity building, training expertise as we try to innovate and plan our strategy on how we can move forward.”

Steiner was accompanied to the meeting by the Executive Secretary for the Basel, Rotterdam and Stockholm Convention, Professor Rolph Payet, who was also the Seychelles’ former Minister of Environment before taking up his current post in 2014.

Steiner told journalists that UNEP was ready to collaborate and help the Seychelles government in developing the Blue Economy concept further and investigate future opportunities for jobs as well as the potential to help the Seychelles develop further in the fields of renewable energy, fisheries and tourism.

“I have not only a great deal of focus on this year, 2015, with the major conference in New York that will adopt sustainable development goals, the climate change conference in December, and then next year, in my last month will be the second United Nations Environment Assembly, and beyond that, no plans yet!”

The COP8 meetings will continue until the end of this week, ending with the convention’s final recommendations and closing statements on Friday.