Anti-heroin program in Seychelles shows promise, but drug problem is big and growing 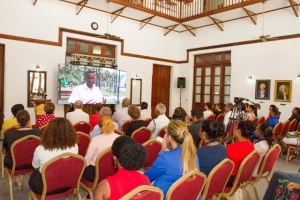 The presentation was based on the findings made during a review that the agency carried out to see progress made in the past four months of operation. (Thomas Meriton)

According to research by the agency, there are around 5,000 heroin users in Seychelles, an archipelago in the western Indian Ocean, with a population of 95,000.

Patrick Herminie, the state’s top drug official, said during a presentation at State House on Monday that only 1,500 addicts are following the methadone programme.

“The drug situation in Seychelles is clearly a menace to the existence of the country. More than 10 percent of our working force is not able to work as they are abusing drugs and many of them are also being affected by other diseases such as HIV, Hepatitis C, and other complications,” said Herminie.

A study called the ‘Seychelles Biological and Behavioural Surveillance of Heroin Users of 2017’ showed that 5.6 percent of the population aged 15 years and above are heroin users.

The Secretariat for the Prevention of Drug Abuse and Rehabilitation was established in November 2016 to address the increased drug problem in the country. In August last year, the Agency was set up under a legal instrument to provide the Secretariat with more leverage to deliver its mandate.

Herminie said that there is a need for a better workforce and facility.

“It is important for us to introduce new buses that are appropriate for the work being done when we are distributing methadone. With the introduction of new drugs in the country and the fact that eventually, we will have to remove the patients from the methadone programme, it will also be necessary to have a rehabilitation centre in the country,” said Herminie.

He added that as of next year there will be a need to increase the number of patients that the agency gives care to as there are “a lot more than 5000 people who are addicts.”

Herminie stressed that education is key to eliminate the drug problem in the country. At the moment a committee is being created jointly by the agency and the Ministry of Education, so as to set up a school-based programme to encourage a new mindset in children. This programme will start with primary one students through to post-secondary.

“If we are unable to create resilience in our youth and their ability to say no to substances, we will never be able to deal with the drug problem in Seychelles,” said Herminie.

The secretary of state said that the methadone programme is a prevention programme which stops drug users from getting infected and ending up in prison. The programme is also cost effective as the agency spends $36 on each patient per year which is significantly lower than the $14,776 that the government spends on each prisoner per year.


Tags: Agency for the Prevention of Drug Abuse and Rehabilitation