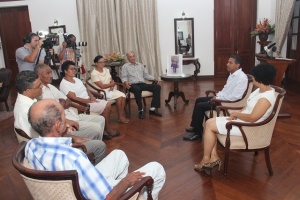 President Faure formally asked the brothers and sisters of the late Berard Jeannie for forgiveness for the loss of their brother and in the manner in which he passed away. (Patrick Joubert)

(Seychelles News Agency) - The President of Seychelles, Danny Faure, has for the first time publicly asked for forgiveness from the family of Berard Jeannie, a police officer killed during a coup d'etat in the island nation 41 years ago.

“Today I would like to formally ask the brothers and sisters of the late Berard Jeannie for forgiveness for the loss of their brother and in the manner in which he passed away,” Faure said Thursday at State House in a gathering with the Jeannie siblings.

“For the past 10 months, I have had several discussions with the family. Together we talked about how to turn the page on such painful event and open a fresh chapter which will inspire the younger generation,” said Faure.

Jeannie was 26 and on duty when he was gunned down on June 5, 1977, during a coup d'état against the late James Mancham, the President at the time.

France-Albert René, who was the then prime minister, became President after overthrowing Mancham. Seychelles became a one-party state until 1993. Two other Seychellois residents -- Francis Rachel and Davidson Chang Him -- also died that day.

On behalf of the family, Maria, who is Jeannie’s sister, thanked the President for his humility in asking for forgiveness. “When our brother’s blood was spilt you were only a boy of 15, but you have accepted such burden. We are grateful that you have abolished June 5th as a public holiday as each year our family relives this tragic and painful event.”

It was two months after he became President, in his 2017 New Year's message, that Faure abolished the date as a public holiday.

“I believe that all of us, including myself, we need to work harder to bring unity to our country. So I've decided to propose an amendment to the law that governs public holidays. The 5th of June will be a normal working day, reinforcing the unity of our people” Faure had said in his message.

Faure assumed office as the third President of the Third Republic of Seychelles – a group of islands in the western Indian Ocean - in October 2016.