Ex-Congo VP to be sentenced for bribing witnesses 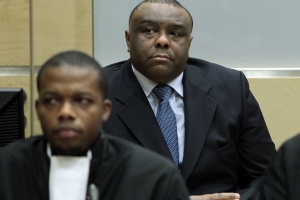 Former DR Congo vice president Jean-Pierre Bemba (R) sits in court with one of his lawyers (L) at the International Criminal Court (ICC) in the Hague on October 19, 2010. World court judges removed the final hurdle today to starting the war crimes trial of Bemba, rejecting his bid to have the case dismissed. The 47-year-old stands accused of three charges of war crimes and two of crimes against humanity allegedly committed in the Central African Republic (CAR) from October 2002 to March 2003. (AFP PHOTO/POOL/Peter Dejong)

(AFP) - Former Congolese vice president Jean-Pierre Bemba and four associates will be sentenced Wednesday for bribing witnesses during his war crimes trial, in the first such case before the International Criminal Court.

Hoping it will serve as a deterrent, prosecutors have asked for an eight-year sentence against Bemba, already serving an 18 year-term behind bars for crimes committed by his marauding troops in the Central African Republic in 2002 to 2003.

"The type of sentence, whether heavy or light, will send a clear message about the gravity of the crime," said Mariana Pena, from the Open Society Justice Initiative, an international law advocacy group.

Prosecutors have recommended that Bemba, 54, be handed a new jail term "consecutive to his sentence in the main case."

The feared former rebel leader and his four associates were found guilty in October of bribing witnesses in what judges at the world war crimes court described as "clear and downright criminal behaviour".

The bribery verdict was the first of its kind in the ICC's history, and the charges were brought after a tip-off to the prosecutor's office.

Handing down their verdict, the judges said Bemba had tried to skew his main trial and had "planned, authorised, and approved the illicit coaching" of the witnesses.

Prosecutors said Bemba masterminded a network to bribe and manipulate at least 14 defence witnesses, persuading them to lie.

Set up in 2002 to prosecute the world's worst crimes, the ICC goes to great lengths to try to protect witnesses and its trials from any interference.

Pena told AFP that Wednesday's sentence could "dissuade some people from committing this type of crime" adding witness interference had already had an impact on some cases before the ICC.

The charges against Kenyan President Uhuru Kenyatta and his vice-president William Ruto had to be abandoned by the ICC due to a lack after proof amid allegations of witness tampering.

Bemba was sentenced in June 2016 to 18 years in jail on five charges of war crimes and crimes against humanity committed when his troops went on a rampage in neighbouring CAR.

His main trial was the first before the ICC, based in The Hague, to focus on sexual violence as a weapon of war, and the first to find a military commander to blame for the atrocities perpetrated by forces even though he did not order them.

A chilling series of rapes, murders and atrocities were committed in the CAR between October 2002 to March 2003 by troops from Bemba's Congolese Liberation Movement (MLC).

After a lengthy trial which opened in November 2010, the judges found Bemba retained "effective command and control" over the 1,500 MLC troops he sent to CAR to quell an attempted coup against then president Ange-Felix Patasse.

Once a wealthy businessman-turned-warlord, Bemba became one of four vice presidents in the transitional government of DR Congo President Joseph Kabila.

In 2006, he lost to Kabila in a presidential election run-off and fled to Europe. He was arrested in 2008 in Brussels and handed over to the ICC.

His MLC militia has since morphed into a political party and is currently the second-largest opposition group in the National Assembly.