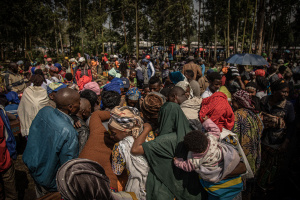 Internal displaced paople, fleeing the recent clashes between M23 rebels and Congolese soldiers, gather in Kanyarushinya north of Goma on May 27, 2022. Recent clashes between the military and M23 rebels in eastern Democratic Republic of Congo have displaced 72,000 people, the United Nations said Friday, warning that fleeing people faced "constant violence" and the looting of their homes. (Aubin Mukoni / AFP)

(AFP) - Recent clashes between the military and M23 rebels in eastern Democratic Republic of Congo have displaced 72,000 people, the United Nations said Friday, warning that fleeing people faced "constant violence" and the looting of their homes.

In a statement, the UNHCR refugee agency said 72,000 peoople had fled their homes in the Rutshuru and Nyiragongo territories of North Kivu province since May 19.

"At least 170,000 civilians have been displaced, often repeatedly since an escalation of fighting in eastern DRC from November 2021," the statement added.

Separately, the Norwegian Refugee Council (NRC) and International Rescue Committee (IRC) said on Friday that around 37,000 people had fled Rutshuru and Nyiragongo since May 22.

Clashes between the army and M23, a primarily Congolese Tutsi group, have spread close to the provincial capital Goma since erupting late last week.

M23 briefly seized the city in late 2012 before the army quelled the rebellion the following year.

But the militia resumed fighting this year, accusing the Congolese government of failing to respect a 2009 agreement under which its fighters were to be incorporated into the army.

"This new escalation of violence is threatening the humanitarian community’s capacity to provide timely support in a region where 1.9 million people have already been displaced," said Caitlin Brady, the NRC's DR Congo director.

The UNHCR said that people on the move "are exposed to constant violence," with fields and property they leave behind at risk of being looted.

Some displaced families have taken shelter in churches and schools in Goma and urgently need assistance, the NRC and IRC warned.

The DRC, a vast nation of 90 million people, has accused neighbouring Rwanda of backing M23, an accusation that Rwanda denies.

More than 120 armed groups roam volatile eastern DRC, many of which are a legacy of regional wars more than two decades ago.