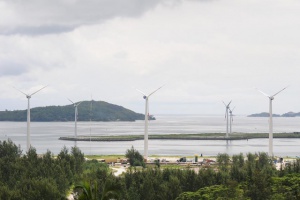 Seychelles' eight wind turbines produces around 2.5 percent of the islands’ energy requirements. During discussions at the climate change summit in Morocco, Seychelles has been encouraged to come up with new projects to reduce the emission of CO2 into the atmosphere as part of its roadmap to shift towards 100% renewable energy consumption. (Patrick Joubert, Seychelles News Agency)

(Seychelles News Agency) - Discussions at the recent climate change summit in Morocco highlighted actions Seychelles needs to take as it aims to achieve the objectives of the Paris Agreement, government officials who attended the meeting said this week.

Delegates from over 100 countries attended the gathering, which concentrated on actions needed to achieve the priorities of the Paris Agreement, particularly focusing on adaptation, transparency, technology transfer, mitigation, capacity building and loss of damages.

The meeting was held less than a year after the deal was reached during the COP21 meeting in France’s capital last December, which saw the 195 participating countries adopt the first global agreement on climate change. This is a binding treaty that aims to limit global warming to below 2 ° C.

Commenting on the outcomes of the Marrakesh gathering, the Seychelles’ environment, energy and climate change ministry said that when it comes to mitigation, it was agreed during discussions that the island nation, which has a roadmap to shift towards 100% renewable energy consumption, needs to have a more ambitious climate action plan.

The island nation’s government has favoured a multi-pronged approach towards achieving its goal, with a range of different types of clean energy sources.

The most visible of these renewable energy sources are the eight giant wind turbines near the port of Victoria, the archipelago’s capital, which produces around 2.5 percent of the islands’ energy requirements, providing enough electricity to power around 2,000 homes.

A renewable energy rebate scheme from government is also encouraging inhabitants to invest in photovoltaic (PV) solar panels for both residential homes and businesses.

Seychelles’ Principal Secretary for Energy and Climate Change, Wills Agricole, told SNA that “we have been told that we need to review our Nationally Determined Contributions (NDCs) and come up with new projects to reduce the emission of CO2 into the atmosphere, and even go further than the target of below 2 degrees Celsius.”

With regards to adaptation, Seychelles has been asked to prepare a new work plan. Agricole, also the focal person for climate change in Seychelles, said the United Nations Environment Programme (UNEP) has already agreed to assist in this regards.

Seychelles, a 115-island archipelago in the western Indian Ocean, remains vulnerable to the effects of climate change. The island nation is not new to water shortages caused by changes in rainfall patterns. Coral bleaching, coastal erosion and rising sea level are some of the other imminent threats.

Agricole told SNA that assistance for capacity building to be able to deal with the effects of climate change was pledged to Seychelles during the Morocco gathering.

“We are expected to receive $300,000 by the end of the year from the Green Climate Fund that will go towards the strengthening of our capacity and institutions,” Agricole said, adding that a further $700,000 will be made available later on.

The meeting was also an opportunity for Seychelles to became a signatory to the International Solar Alliance -- a platform for cooperation among sun-rich countries seeking to efficiently exploit the use of solar energy to reduce dependence on fossil fuels. The initiative launched at the COP21 meeting in Paris last December by the French President and Indian Prime Minister aims to mobilize $1 trillion by 2030 to implement renewable energy projects.

The Seychelles Minister for Environment, Energy and Climate Change, Didier Dogley said that the COP22 meeting was a success for Seychelles, in terms of the agreements signed and commitments received for financial support from various international organizations.

One agreement signed with the Food and Agriculture Organisation (FAO) will see the island nation benefit from $400,000 to assist local farmers in climate-smart agriculture practices, to mitigate the effects of extreme weather conditions such as drought, flooding caused by heavy rain, or rise in sea level, as well as new pests that threaten the agricultural sector.

Dogley said: “The money will be used to train farmers and provide new technologies needed for them to prepare themselves and adapt and continue to be productive.”

Dogley noted that he was also assured financing from the Global Environment Facility (GEF) following talks with its chief executive Dr. Naoko Ishii.

Other than renewed commitments for funds, Dogley said COP22 also gave Seychelles more visibility internationally, as the Seychellois delegates were invited to showcase the island’s climate change initiatives at various side events. Their presentations focused on the importance of the blue economy to Africa, where Seychelles gave a presentation on various approaches being implemented to better manage and develop its oceanic resources.

The Seychelles delegation at the COP22 meeting was led by President Danny Faure, who joined leaders from 70 other countries to adopt the Marakech Action Proclamation. This reaffirms their commitment to climate action under the Paris Agreement adopted in December 2015.

The Paris Agreements is the first legally binding treaty aimed at combatting climate change. It entered into force on November 4 and to date 113 countries have ratified it.

The next session of the Conference of the Parties to the United Nations Framework Convention on Climate Change (COP23) will be organised by Fiji and hosted in Bonn, Germany, in November 2017.