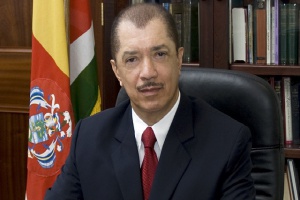 (Seychelles News Agency) - The President of Seychelles James Michel has expressed his condolences after the death of Thailand’s King Bhumibol Adulyadej.

Bhumibol, the world's longest-reigning monarch, passed away on Thursday at age 88 after years of ill health.

In his message of condolence addressed to the Prime Minister of Thailand Prayut Chan-o-Cha, President Michel said King Bhumibol was highly regarded as a unifying father figure with a towering presence.

The Seychellois head of state described the Thai Monarch as “an influential and revered figure that commanded the respect of the Thai people as well as the world.”

“The King was prominently engaged in championing democracy over the country he governed with justice, pride and devotion to his people and remained unhinged, being loyal and benevolent in his humble ways to the very end,” added Michel.

Several media across the globe have described King Bhumibol as a pillar of stability during his 70-year reign in a country that has faced political turmoil in recent years.

According to a BBC article, his son -- Crown Prince Maha Vajiralongkorn -- has been named as his successor, but has asked for a delay in the process.

A government holiday was declared in Thailand on Friday as people mourn the passing of the monarch, although the country's commercial activities carried on as usual.

According to an AFP article, thousands of people in Thailand were seen lining the streets of Bangkok hoping to see King Bhumibol Adulyadej's body moved to his palace as funeral preparations get underway.

Thailand remains under military rule following a coup in 2014.