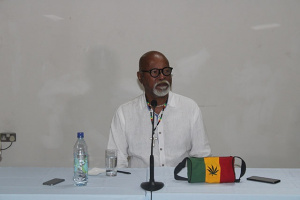 The political party Lalyans Seselwa is throwing its weight behind the ruling party, United Seychelles, endorsing its slate of candidates in the presidential and legislative elections, party leader Patrick Pillay said Tuesday.

Pillay said his endorsement for the US – except in the three districts where his candidates are standing for the National Assembly -- is because of his admiration for the principles of late France Albert Rene, former president and the founder of US which at that time was the Seychelles Peoples United Party (SPUP).

Pillay, who had hoped to run for president until his candidacy was found to have not met the legal requirements, said that back in 2015, his party joined the opposition alliance to form Linyon Demokratik Seselwa for one purpose and that was to remove former President James Michel from power, which happened when the latter relinquished power in October 2016.

“I do not know which principle has changed since Mr Rene started his party. There may have been a change in leadership, there may have been treason by the very person whom Mr Rene handed power to, but the principles of equality in opportunity, the principles of democratization of education of which I was part of as this is my domain, allowing free health for all people of Seychelles, irrespective of your means whether you can pay or not, is still very much in vigour and robust policy of the current government. How can I support other people when this kind of opportunity has been given to each and every Seychellois and is now very much en vigeur as we say in French” explained Pillay.

Pillay said that he had met with the party leaders of One Seychelles and of United Seychelles. The leader said that after consultation with his executive members he has decided to endorse the US.

“We want unity with a party which its principle we believe in. United Seychelles is preaching, peace, love and forgiveness and it is not preaching hatred, vengeance and violence. We go with United Seychelles and we continue on this political journey,” explained Pillay.

The leader of the Lalyans Seslewa also said that he will not be proceeding with the legal process against his disqualification as a presidential candidate.

“I have decided and have told my lawyers, it will be a distraction. Some people love going up and down in the courts but the courts are busy. There will be no legal action. Let the Seychellois decide who to vote for and let there be a strong presidency and a strong national assembly,” said Pillay.

Pillay had said on September 17 that his lawyers were filing a petition for an injunction against the Electoral Commission's decision to disqualify his nomination as a presidential candidate for Lalyans Seselwa for the October election.