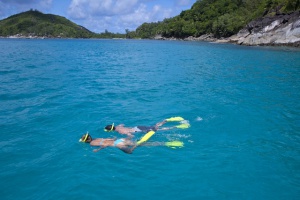 The cooperation between the Seychelles National Parks Authority and the French National Park of Port-Cros is expected to start with exchanges in the field of marine parks, but will eventually have exchange programmes for terrestrial parks. (Gerard Larose, Seychelles Tourism Board)

(Seychelles News Agency) - The Seychelles National Parks Authority (SNPA) and the French National Park of Port-Cros will share expertise in the management of marine and coastal reserves under a new partnership agreement.

The two authorities and the Indian Ocean Commission signed a partnership convention on Thursday in Victoria, the capital of Seychelles, an archipelago in the western Indian Ocean.

“The main objective of this partnership is to strengthen the management capacities of these parks and reserves through demonstrations in the field and the exchange of experiences,” said Didier Dogley, the Seychelles’ Minister of Environment.

Dogley said the Seychelles’ marine parks, like that of Port-Cros, face the same challenges linked to tourism activities and dealing with a large flow of tourists in peak season.

“The SNPA will learn how Port-Cros manages tourists, develops pedestrian and maritime paths, creates sensitization and informational tools, and also does surveillance of the sites,” he said.

The SNPA is responsible for six marine parks and three land parks since 1979.

The National Park of Port-Cros, created in 1963, is the oldest national park in France with more than 50 years in the management of marine and land protected areas and manages 1,700 hectares of the land surface and 2,900 of marine surface.

The agreement for the project that will last for three years at a cost of $1.3 million was signed by Minister Dogley, Lionel Majesté-Larouy, the French ambassador to Seychelles and Jean Claude de l’Estrac, the Indian Ocean Commission’s outgoing Secretary-General.

It is part of the Integrated Coastal Zone Management of the Indian Ocean Commission and is implemented by the Commission with financing from the French environment fund.

According to Flavien Joubert, the Chief Executive of SNPA, the first two beneficiaries under the programme will leave for France in September on attachment with the French National Park of Port-Cros in the Mediterranean, South of France.

Similarly, French officers will visit Seychelles three months later to learn from SNPA’s expertise on the management of ecologic docking buoys and the sustainable financing mechanisms of the parks.

“We are starting with marine parks, but we will eventually have exchange programmes for terrestrial parks where we know we can learn a lot from the French,” Joubert told SNA.