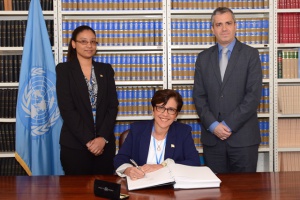 (Seychelles News Agency) - The signing by Seychelles of the landmark Paris Agreement on climate change is a turning point in the global negotiations on the world's environment, says an official from the Seychelles Ministry of Environment.

Seychelles’ permanent representative to the UN, Marie-Louise Potter, signed the agreement last week together with 175 other countries in New York.

Didier Dogley, Seychelles’ Minister of Environment, told SNA on Tuesday that “signing the agreement brings us closer to implementation and this is the key turning point of any agreement as it becomes legally binding for all countries.”

UN Secretary-General Ban Ki-moon had called on governments to sign the agreement as a reaffirmation of a commitment to deliver on the promises made in December.

The Paris Agreement negotiated by around 200 countries at the UN's 21st Conference on Climate Change in Paris (COP21) set a target of limiting global warming to "well below" 2.0 degrees Celsius (3.6 Fahrenheit) compared to pre-industrial levels.

Minister Dogley says Seychelles together with other small island states will now push for implementation given what is happening worldwide because of global warming.

“We are only 1 degree Celsius above pre-industrial temperature level, and we are already seeing what is happening all over the world. In Seychelles, we have witnessed cyclone Fantala hitting one of our islands and coral bleaching and coastal erosion. The whole weather pattern is changing,” he told SNA.

The agreement was endorsed by the Seychelles’ cabinet of ministers this year on February 19 and subsequently ratified by the National Assembly on April 12.

To date, 16 countries including Seychelles, a group of 115 islands in the western Indian Ocean, have ratified the agreement.  A minimum of 55 countries need to ratify the agreement for it to become legally binding.

After ratification, Dogley says, “Everybody has to do their own thing to cut back on greenhouse gas emissions and at the same time, its puts more responsibility on the rich countries which have caused most of the damage.”