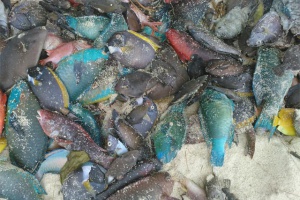 Fresh samples of water and fish collected further out at sea will be sent to Reunion tomorrow morning. (Ronley Fanchette, Ministry of Environment, Energy and Climate Change)

(Seychelles News Agency) - Freshly collected water and fish samples will be sent to Reunion island, a French overseas department in the Indian Ocean, as soon as possible for testing, as the Seychelles authorities continue to investigate the ‘fish kill’ affecting the island nation.

The tests are required to determine what exactly is causing a large number of fish mainly coral reef populations, as well as other species to die-off.

The Seychelles Fishing Authority, SFA, has confirmed that previous samples of fish collected mainly from dead ones found on the beaches and water taken close to the shore that had already been sent to Reunion, were not good enough to give accurate results.

SFA’s Chief Executive Vincent Lucas told SNA this afternoon that they have now collected water further out at sea and preparing fresh samples of fish that had just died or were about to die.

The fresh samples are expected to be sent to Reunion island tomorrow morning while another batch will later be sent to France.

It was last week that the ‘fish kill’ was first observed in various parts of the second most populated island of Praslin and neighbouring Cousin nature reserve, the main island of Mahé and other satellite islands.

This followed observations dating to around two weeks ago of a change in the colour of the sea in some areas to a yellowish, red to dark green, which led the environment ministry to confirm reports of an algal bloom.

The tests being done in overseas laboratories in the absence of such specialized facilities locally will determine the plankton species present in the water and whether the ‘fish kill’ is due to any toxic plankton causing the algal bloom or a lack of oxygen.

Local tests have identified one of the planktons to be a Genus cochlodinium which is toxic.

More conclusive results will hence determine the fate of the artisanal fishermen as their trade has somewhat been put on hold over the last couple of days with mostly coral reef fishes being affected.

The Seychellois population of around 93,000 people which depend heavily on fish for their main source of protein is also concerned as the health authorities have cautioned against the consumption of fresh fish until the test results are known.

The chairperson of the Seychelles Fishermen and Boat Owners Association, Keith Andre told SNA that some fishermen have had to get rid of their entire catch from their laid fish traps in recent days.

He noted that the fishermen are concerned over the health of the coral reefs as well as the amount of time it would take for the fish to start coming back to the affected areas expressing the fear of his colleagues that the situation could have an impact on the food security of the nation, given that fish is the main source of protein for the population.

In a joint press conference bringing together the relevant authorities on Wednesday, the Seychelles National Park Authority confirmed that the algal bloom is mostly visible around areas where there is not much water circulation, as in the bays.

The islands of Recif and Fregate lying some 50 kilometres east of the Seychelles’ most populated island of Mahé as well as the north-western part to the southern coast of the main Mahé are the areas proven to have the most concentration of the algae phenomenon.

This was determined as a result of an aerial survey conducted by SNPA officials with the help of the Seychelles Air Force, to assess the distribution of the algal bloom within the waters surrounding the main islands of the archipelago.

Nevertheless, Rodney Quatre who is in charge of the Seychelles National Parks Authority's research section noted that their observation shows that the algae are starting to decompose in certain areas and that the sea is getting clearer.

The Seychelles Fishing Authority has indicated though, that should another algal bloom phenomenon develop, the subsequent effects would only worsen the situation.

SFA’s Chief Executive, Vincent Lucas has spoken about the need to start some immediate monitoring activities.

“We need to set up a system that will enable us to continue to monitor…the sea, the fish that are found dead, samples of the water that would allow us to know if there are new fish species dying or new blooms taking place,” said Lucas.

SFA has been receiving the public and other groups in the community to be able to have an accurate picture of how much fish exactly are dying, to better assess the impact of the ‘fish kill’ on an industry that is considered the second pillar of the economy.

“For example we’ve had help with the Ephelia Resort and Spa that helped us with collecting and burying the fish. They informed us that during the past few days, they collected about… 500 kilograms to one tonne of dead fish. On average we could be collecting 400 to 500 kilograms of fish,” said Lucas.

The Seychelles second most populated island of Praslin has been the worse hit so far, with about two thousand Rabbitfish, locally known as ‘Kordonnyen’ in the traditional Creole language being found washed up dead on the beaches so far.

As this is not the first time the island nation has been faced with an algal bloom although previous cases including one which was reported within the Port of Victoria in June last year, did not bring about such devastating consequences on the marine species, especially the coral reef fish, Seychelles is gathering enough information that will be required in the event the country seeks international support to better be able to deal with such situations in future.

The Principal Secretary for Environment, Alain de Commarmond has said that Seychelles has already established contact with international organisations including the United Nations Educational, Scientific and Cultural Organization (UNESCO) and the International Atomic Energy Agency (IAEA) among others that could help the country to gather data, to carry out tests and to build capacity.