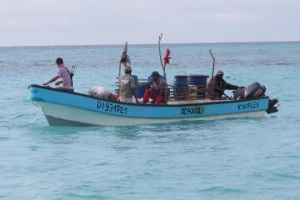 Eleven of the foreign fishermen were transferred to Mahé on Friday last week while the remaining eight made it to the main island yesterday. (SIF)

(Seychelles News Agency) - The Seychelles Islands Foundation (SIF) is seeking the assistance of the archipelago’s Coast Guard for increased surveillance of the waters surrounding the Indian Ocean archipelago’s most far-flung atoll, Aldabra. This follows increased incidents of what is believed to be illegal fishing activities in the surrounding areas.

A total of 19 fishermen thought to be citizens of neighbouring Mayotte [a French overseas department in the Indian Ocean] and the Comoros, are currently being detained by the Seychelles police.

In an interview with SNA, the Chairman of the SIF, Maurice Loustau-Lalanne, also Principal Secretary for Foreign Affairs explained that the 19 men had been caught onboard five different boats at various intervals, over the past week.

All of the foreign fishing vessels were intercepted by SIF rangers with the help of three Coast Guard officers who have been based on Aldabra for about a month now, after the suspicious activities were detected.

“The first boat was caught last week while [SIF officers] were making a crossing from the island of Assumption to Aldabra…with three men on board, and they were fishing within the boundaries of the Aldabra Special Reserve…we have photos showing that they had fish and other equipment including baits and food onboard,” says Loustau-Lalanne.

“As the days went by we caught a second, third, fourth and fifth fishing boat….a sixth boat was also spotted but could not be caught because of low tide at the time.”

The remote atoll of Aldabra, comprised mainly of the larger islands of Ile Picard (West Island), Polymnie, Malabar Island (Middle Island) and Grand Terre (South Island) is located in the westernmost part of the Indian Ocean archipelago, some 1,100 kilometres from the main island of Mahé.

The UNESCO heritage site which is home to a population of endemic giant Aldabra tortoises that is far greater than the 90,000-strong human population of the Seychelles as well as to a wide variety of birdlife, marine life and exotic species is managed by the SIF, a public trust established in 1979.

“We’ve had to bring in police officers to gather evidence and statement on Aldabra and to see the situation for themselves…Aldabra is a scientific base, so we have weighed all of the fresh fish found on the boats and stored them on the island,” explains Loustau-Lalanne.

While only one of the five was not found with any fish onboard, approximately one tonne of fish is said to have been retrieved from the other four.

All of the 19 fishermen have been transferred to the main island of Mahé where they are being detained while the investigation into the reported illegal fishing incidents continues.

The investigation will also confirm the identities of the fishermen.

The first group of eleven fishermen were flown to the main Seychelles island of Mahé in last Friday evening, and the remaining eight were transferred yesterday. they have all appeared in court and have been remanded in police custody.

Under the Fisheries Act of 1986 which was recently amended in January last year to reflect Seychelles' ratification of various regional and international treaties and legal instruments to prevent illegal fishing; penalties for illegal fisheries range in severity based on the size of the boat suspected of infringing the law.

The increased presence of small foreign vessels being spotted around Aldabra and its surroundings since August was first reported in its October newsletter.

The conservation organization is now requesting for further assistance from the naval forces in addition to the help of three Seychelles Coast Guard officers who have been accompanying SIF officers on their day to day duties around the atoll and nearby islands.

“We believe that this is an organized operation; whereby the small boats are going out fishing and bringing back their catch to a bigger vessel. This is why..we are requesting for a Coast Guard Vessel to be sent out there in the South so that it can patrol around the islands of Cosmoledo, Astove, Aldabra and Assumption,” says Loustau-Lalanne.

The Seychelles archipelago consists of 115 widely-spread coral and granitic islands, and the nation’s Exclusive Economic Zone (EEZ) covers a vast 1.3 million square kilometres of ocean, an area that is often difficult to police for illegal fishing activities.