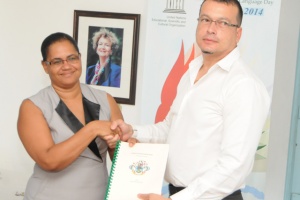 (Seychelles News Agency) - The 90,000 inhabitants of the Seychelles islands are today able read to the nation’s constitution in their mother tongue, Creole.

The institute is situated at Au Cap, 15 kilometres south of capital city Victoria, and the event was attended by ministers and members of parliament and top government officials.

“Here in Seychelles, we have always left room for our mother tongue to develop further,” said Penda Choppy who heads the institute, said during the event.

She gave a hard copy of the constitution in Creole to Seychelles’ attorney general Ronny Govinden as the electronic copy was launched.

Guest were also able to view earlier educational and other publications produced in Creole.

The young nation’s population – established just over 100 years ago – is made up of descendants of settlers from Europe, traders from Asia and former slaves from Africa, who later intermarried forming a rainbow nation that forged their own language.

Seychellois Creole, a French-based mixture of languages, is the most widely spoken on the islands, although the nation’s 99% literacy rate allows most people to write, speak and write French and English, the latter being the second favourite after Creole.

The islanders are able to communicate with their southerly Mauritian neighbours in their slightly different Creole, and with others who speak distant dialects of the same language from as far as Haiti and several Caribbean island nations.