Seychelles is on track with paying off its external debts, says government 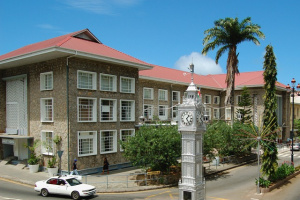 According to data from the ministry, the total debt stock of Seychelles for the first three quarters of 2022 stands at SCR 17.6 billion ($ 1.33 billion). (Gerard Larose)

(Seychelles News Agency) - Projections made by the finance ministry for 2022 indicate that Seychelles has a debt-to-GDP ratio of 68 percent, coming down from 92 percent in 2020 when the COVID-19 pandemic greatly impacted the island nation.

According to data from the ministry, the total debt stock of Seychelles for the first three quarters of 2022 stands at SCR 17.6 billion ($ 1.33 billion), with a little over SCR 7.76 billion ($ 590 million) owed to multilateral, bilateral, commercial, and private creditors.

Compared to the previous quarter of the same year, the external debt increased by SCR 307 million ($23 million) in the third quarter which ended in September.

This is attributed to the continuous disbursement of the International Monetary Fund's (IMF's) budget support and a loan from the Trade Development Bank (TDB) to repay the Etihad liabilities in relation to Air Seychelles' debt and release the security on the airline's two twin otter airplanes.

The largest amount of debt is owed to multilateral creditors such as the African Development Bank (ADB), the European Investment Bank (EIB), the International Bank for Reconstruction and Development (IBRB), and IMF among others. This amounts to a total of over SCR 5.03 billion ($380 million).

In a press conference on Monday, the director general of the debt management division at the finance ministry, Dick Labonte, said that Seychelles is on track with paying off its external debts.

"We just settled our debt with Libya and we still have debts with other countries. We are paying them off as per our agreements and this is being done on good terms with these countries," explained Labonte.

Out of all the bilateral creditors, Seychelles owes the largest sum, standing at SCR 590 million ($43.4 million) to the Paris Club. The Paris Club includes the group of major creditors - Belgium, France, Germany, Italy, Japan, Russia, Spain, and the UK - whose role is to find coordinated and sustainable solutions to assist debtor countries who face debt payment difficulties.

The increase in domestic debt is mainly attributed to an increase in the stock of Treasury bonds following new issuance in August. A reduction has, however, been noted in the stocks of Treasury bills, loans, and other debt liabilities as the government continues to service its debt.

The majority of domestic debt is in the form of securities, of which Treasury bonds make up for the bulk at 60.5 percent of the domestic stock.

With the country projecting a primary fiscal surplus of SCR 330.3 million ($25 million), - a 1.1 percent of GDP growth in 2023 - Seychelles is set to be in a better position to pay off its debts.

"Based on the good performance, in the medium term, we expect our debt to have been reduced to 55.3 percent by the end of 2025. The government is targeting its debts to be reduced to about 50 percent in 2026, which was the target before the pandemic. These will all be supported by the good performance of the economy and the good fiscal consolidation," said Labonte.