2 years in office: This year was not without its challenges, says Seychelles' President 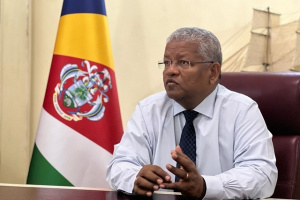 It is now two years since Ramkalawan was sworn into office and his first year was dominated by the Covid-19 pandemic. (Rassin Vannier, Seychelles News Agency)

On October 26, 2020, Wavel Ramkalawan took office as the 5th President of Seychelles, after a landslide victory in the presidential and legislative elections.

It is now two years since he was sworn into office and his first year was dominated by the Covid-19 pandemic.

SNA met with Ramkalawan, 61, to learn more about his second year as Seychelles' President.

He said there have been many positives throughout the past year but also challenges.

SNA: Can you briefly tell us how you found your second year in office?

WR: Let us place ourselves back to October 2021, when the airport is open after 70 percent of the country's population has been vaccinated. The economy was recuperating, construction projects restarted and many things were going back to normal.

Then, just a few months later, the war in Ukraine starts, and although we have made it through the worst of the Covid-19 pandemic, global commodity prices are on the increase. However, Seychelles at that time, continued to make important progress, earning a Fitch Ratings upgrade in December 2021, followed by a second upgrade recently, while numerous airlines made the decision to come to Seychelles.

In all, I would say that there have been a lot of positives, although I will not say that this second year has not been without its challenges, as we had to make some very tough decisions.

SNA: What are some of those tough calls you had to make?

WR: One decision that was difficult for us to take was to increase the public bus prices, but we had to see how to ensure that the impact on the public was minimal.

We also revamped the welfare system, where we looked at ways for people to be able to stand on their two feet rather than be dependent on welfare and at the same time, we created employment for Seychellois. There are a lot of employment opportunities for Seychellois, but we don't have enough Seychellois to take these positions.

SNA: One of your main objectives, when you took office, was to deal with the issue of drug trafficking, how has that been in your second year?

WR: During this second year, we have seen some big arrests made and I am satisfied with how things have gone. I will say that in the last two years we have eliminated more drugs in the country than in many years before that and we have also destroyed a lot of drugs entering the country.

We had the help of UAE to train our dogs in detecting drugs and they have returned and are now really helping our work. There is still a lot of work to be done and with the help of our partners, our fight will go on.

SNA: There are also various projects that your government has approved over the past year, are you pleased with their progress?

WR: Yes, I am. On Praslin, we have ongoing work on the passenger terminal at the Baie Ste Anne Jetty, which is due to be completed in December. The ice plants for Grand Praslin Fisherman have been completed and this will be a big help to them.

We also have projects for Praslin farmers, which are also moving well. On La Digue, we have ongoing works on their Jetty while the progress with the new La Digue hospital is fantastic and we are on target to complete it by early next year.

A new sewage system is also due to be completed soon on the island, so I will say that I am satisfied with their progress.

SNA: Often people look at things from the outside and have a certain perception of things. Today you find yourself on the inside, is it what you expected?

WR: I will say that looking at it from the inside now, things are definitely different. You know, when you see there are problems from the outside when you step into that position, then those problems become yours to solve.

There are many instances where I have asked myself questions, such as why certain decisions were not taken before. For example, the Coast Guard base has been here for a long time, but when I went to visit it, there was no proper road leading to it. It's a small thing, but it's one of the things that made me wonder, why it hadn't been done before.

SNA: In our interview last year, you spoke of your manifesto and your five-year plan. What are your thoughts on the progress of that plan now that you are almost halfway through your mandate?

There are decisions that we must take because as we move forward, we see other issues that must be dealt with, and what we did not necessarily foresee and therefore did not add to our manifesto. These are things such as the need to add new lanes to the road from Bois de Rose all the way to the Providence Highway, but we had to do it nonetheless as we felt there was a need for it to be done.

We are also negotiating with a proprietor on La Digue to make an exchange for a piece of land that will help in building more houses for the people of that Island.

For right now though, I am satisfied that we are working according to our manifesto and I hope that by the end of our five years, we would have accomplished the majority of plans we had put forward.

SNA: In your manifesto, you also put emphasis on renewable energies, how are those plans going?

WR: Yes, we are executing those plans. For example, on La Digue, we are looking at putting in place a two-megawatt photovoltaic system, with the hope that we can make the island completely green.

After that, on Praslin, we are looking into the possibility of installing an 8- megawatt system, which would once again enable us to move closer to making Seychelles more dependent on renewable energies and less on fossil fuels.

SNA: In your position, obviously there will be critics. How do you personally deal with these critics?

Sometimes you also have to listen to criticisms and explain why you made such decisions and look to clear things up. But, I do listen to all critics, where I tend to ignore those that are not justified, while I think that even if it's not justified, I still feel that I could give that person an explanation.

WR: Finally, last weekend, you had your first mass gathering with your party's supporters since you took office, how was it?

WR: It was an exciting weekend. As you said, it was the first time since I was elected that I got the chance to take a microphone and address my supporters. There was a good ambiance, which showed that I still have that connection to my supporters. It was a rally where we spoke of serious matters but also had entertainment.