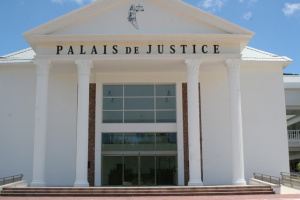 The six accused in the case appeared in the Supreme Court on Friday. (Seychelles News Agency)

(Seychelles News Agency) - The defence lawyers of the six persons facing corruption charges in the missing $50 million case have until March 4 to prepare for their plea after the Anti-Corruption Commission (ACCS) handed over its prosecution files on Friday.

Some 6,000 documents, including audio files, were provided to the accused in electronic form on pen drives and the lawyer of the ACCS, Anthony Juliette, said that the remaining documents will be handed over within the next 30 days.

The six accused in the case; Mukesh Valabhji, a prominent businessman and former chairman of the Seychelles Marketing Board (SMB); his wife Laura – a lawyer; Sarah Zarqhani Rene – wife of late President France Albert Rene; Leslie Benoiton – a senior officer in the Seychelles Defence Forces; Lekha Nair – former CEO of the Seychelles Pension Fund, who was director general in the Ministry of Finance at the time the funds went missing; and Maurice Loustau-Lalanne – former finance minister and formerly a COSPROH board member – appeared in court on Friday.

The case concerns $50 million which went missing after the funds were granted to the government of Seychelles by the United Arab Emirates in 2002. The funds were then transferred to a bank account of the SMB, now known as the Seychelles Trading Company (STC), at a branch of the Bank of Baroda in England.

The prosecution alleges that the funds were returned to Seychelles, an archipelago in the western Indian Ocean, to pay for hotels sold in the privatisation of the COSPROH holdings, a state-owned enterprise that owned several hotels.

Mukesh Valabhji's lawyer, France Bonte, told the court that since the materials are in electronic form, the accused needs to have access to a laptop via his lawyer, while Laura Valabhji, who is representing herself, asked for access to a computer and printing facilities while on remand to review materials and prepare her defence.

The presiding judge in the case, Chief Justice Rony Govinden, ordered that the necessary technology be made available for the suspects to read and listen to the documents the ACCS provided. The laptops' internet connectivity should be made inoperative, according to the judge.

The order comes despite the defence lawyers asking the prosecution to provide them with hard copies of the evidence found on two pen drives.

"The nature of this case is such that there is a huge volume of documents that makes it difficult to hand over all the materials in physical copy," explained Govinden when giving his ruling.

However, Govinden added the ACCS should make available physical copies to the defence as much as possible.

In the case of the Valabhji couple, the court also ordered that they be given reasonable and adequate time for meetings to prepare for their defence together but the security arrangements and the place and time will be at the discretion of the police.

Meanwhile, the remand period of the Valabjhi couple, Zarqhani Rene and Benoiton was extended for an additional 14 days. Zarqhani Rene's request to lower her bail conditions was rejected and she remains on remand because she has not been able to pay the $2 million bail set by the court. Nair and Loustau-Lalanne are out on bail.

The most recent suspect in the case has been set aside and released. The suspect, who was a financial controller of the SMB in 2002, was arrested on January 16 on two offences; corruption and money laundering.