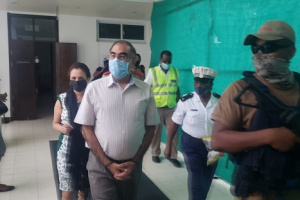 (Seychelles News Agency) - A Seychellois couple facing charges of corruption and money laundering represented themselves before the Supreme Court on Friday after their lead counsel recused himself and their foreign lawyer left the country while awaiting a work permit.

Lawyer Frank Elizabeth said he would no longer represent Mukesh and Laura Valabhji in the "missing $50 million" case, which concerns funds that disappeared from a government account in 2002. He informed the presiding judge, Chief Justice Rony Govinden, that he recused himself as he felt it would be in his "clients' best interest" for them to find alternative representation.

Elizabeth did not respond to calls from SNA to comment on why he recused himself from the case.

Laura Valabhji has been charged with money laundering while her husband, Mukesh, a prominent businessman and former chairman of the Seychelles Marketing Board (SMB), has been charged with conspiracy to commit official corruption. The defence has yet to plead its case and a trial date has not been set.

They also are also suspected of terrorism as a result of a cache of arms found at their residence at Port Glaud on the main island of Mahe.

Meanwhile, British lawyer Miranda Ching of global law firm Kobre & Kim had been hired to work alongside Elizabeth in defending the Valabhjis on the corruption case as well as their separate case of possession of arms and ammunition.

She took her oath before the Supreme Court on January 20 before Justice David Esparon and presented her application documents to Chief Justice Govinden, who outlined the conditions for her work on the Valabhji's case, which includes a gainful occupation permit (GOP), a security bond fee of SCR50,000 ($3,771) and attachment to a local law firm.

On January 21, Ching was involved in an altercation in court with May De Silva, CEO of the Anti-Corruption Commission (ACCS), concerning alleged counsel that Ching was providing to Elizabeth in the courtroom, despite not still having the right to practice, pending her GOP approval. Ming left Seychelles on the same day, according to immigration officials.

On January 26, Kobre & Kim issued a press release stating that their lawyers "were subject to intimidation" by the ACCS while attending the proceedings at court.

According to the law firm, the commission had alleged the lawyers "were party to fraudulent activity and in breach of immigration and employment laws" and that they "strenuously deny such allegations".

Jonathan Huth of Kobre & Kim said: "What we've seen to date in the Seychelles Supreme Court can best be described as a show-trial, founded on a politically motivated prosecution case riddled with errors of fact, procedural defects, and breaches of the basic principles of due process."

The CEO of ACCS has refuted all allegations made and said that none of them are based on fact in a press statement on Friday.

In an interview on Friday, the Principal Secretary for Immigration, Alain Volcere, told reporters that his department had received an application for GOP from the foreign lawyers which was not valid.

"There was a submission for a GOP which was incomplete as there were some documents missing and this deficiency was reported to the law firm," explained Volcere.

SNA attempted to contact Kobre & Kim for further clarification on the issue but did not receive a response.

Four other persons have been charged in the case brought forward by the ACCS concerning the $50 million that went missing, which was a grant given to the government of Seychelles, an archipelago in the western Indian Ocean, by the United Arab Emirates in 2002.