Training seeks to lower cases of gender-based violence in Seychelles 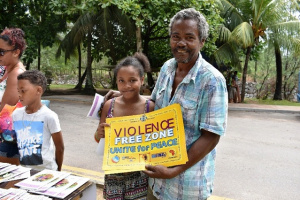 A gender-based violence study in Seychelles in 2016 revealed that both men and women are victims. (Seychelles Nation)

(Seychelles News Agency) - Seychelles recorded 38 cases of gender-based violence from April to September, a crime statistic that a government ministry and U.S. Embassy are seeking to lower through a three-day training.

The training, which is being organised by the Family Department in the Ministry of Youth, Sports and Family in collaboration with the Embassy of the United States, started on Monday at Eden Bleu.

In her address at the opening of the session, the Minister for Youth, Sports and Family, Marie-Celine Zialor said, "It is disheartening to acknowledge that we still have to address this topic. You would think that given all the progress that we have made in our history as human beings, that we would know better by now and that we would do better by now."

Zialor said that "this workshop will equip the participants with the ideal knowledge and skills in order to help perpetrators as well as the victims to bounce back. We have to co-exist in society."

During the sessions, the participants will learn about behaviour change and empathy, evidence-based trauma and informed care. Behaviours of youth will also be covered as well the finalisation of targeted needs assessments.

"As we strategise on ways to mitigate the situation, we are enthusiastic about bringing hope to our families," said the minister.

With the aim to reinforce the awareness and seek the support of various partners to achieve concrete actions, the participants of the training include representatives from the Seychellois society. Also attending are police officers, the legal department as well as spiritual leaders.

Seychelles took a step forward to better protect victims of domestic violence in May last year when the National Assembly voted for the Domestic Violence Act which was subsequently assented to by the then president Danny Faure. The Act prohibits violence in the domestic context, whether caused through emotional, verbal, physical, sexual, economic, or psychological abuse as defined by law. It also provides for the protection of victims of domestic violence and for penalties for the perpetrators.

Since 2012, Seychelles has joined the rest of the world to commemorate Orange Day and 16 Days of Activism against Gender-Based Violence from November 25 to December 10. The campaign initiated by the United Nations seeks to mobilise civil society, activists, government as well as the public in general.