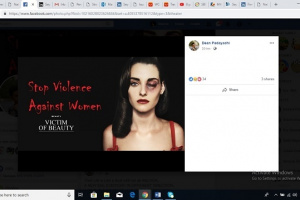 The report on Seychelles states that "domestic violence against women was a widespread problem." (Dean Padayachy/Facebook)

(Seychelles News Agency) - An annual U.S. government report on human rights practices in Seychelles found that violence against women, trafficking in persons, and child labour are the most significant human rights issues in the country.

The report has not been endorsed by the Department of Foreign Affairs, a legal officer said, because it is not reflective of the entire human rights situation in Seychelles and because the department was not consulted during its compilation.

The Country Reports on Human Rights Practices is an annual report from the United States Department of State on human rights conditions around the world.

The Foreign Affairs officer said the report "largely focuses on the challenges of the country when it comes to human rights, which is a good thing, although we must be mindful that a report should be inclusive of the achievements and the steps that are being taken." The Department asked that the officer not be identified by name.

The report on Seychelles states that "domestic violence against women was a widespread problem."

"A gender-based violence survey published in 2018 indicated that 58 percent of women had been assaulted, mainly by their partners, with one in 10 women having been raped. In 2019 the minister for family affairs reported receiving 371 reports of domestic violence, an increase from 2018," the report said.

The main focal point of the law was that plaintiffs may not withdraw a complaint after it is filed with the police.

The report continued to add that "rape, spousal rape, and domestic abuse are criminal offences for which conviction is punishable by up to 20 years' imprisonment. Nevertheless, rape was a problem, and the government generally did not enforce the law effectively. Authorities in general did not prioritise domestic abuse cases and police were undertrained in handling sexual assault cases."

Addressing trafficking in persons, the report outlined that "Seychelles does not fully meet the minimum standards for the elimination of trafficking but is making significant efforts to do so."

"The government did not report identifying any victims of trafficking, and efforts to address sex trafficking remained inadequate. The government also did not implement its standard operating procedures for victim identification and referral or its victim assistance mechanism, and it did not have any comprehensive shelters or care facilities available for trafficking victims, nor did it provide sufficient resources for victim assistance," the report outlined.

As a result, Seychelles was downgraded from Tier 2, a position it earned in 2019, to Tier 2 Watch List.

Another human rights issue outlined in the report was child labour. It stated that "the law does not prohibit all the worst forms of child labour as it allows children as young as age 15 to perform work normally prohibited to children under 18."