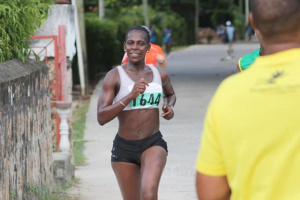 Dick holds the Eco-Friendly Marathon record in the senior female category which she set in 2009 with a time of 3 hours, 30 minutes, 19 seconds. (Vincent Confait/Facebook)

(Seychelles News Agency) - Seychelles lost one of its top female athletes after the passing of long-distance record-holding runner Simone Dick last Friday at the age of 44.

Dick, who hailed from Copolia in the central district of Plaisance, was laid to rest on Thursday in a private ceremony.

The Seychellois athlete, who worked as a senior postman until July last year, started taking part in competitive races in early 2000 and was a member of the local East Coast athletics club.

The Seychelles Athletics Federation said no other female runner in the island nation can currently match Dick's achievements in long-distance running.

Dick holds the Eco-Friendly Marathon record in the senior female category which she set in 2009 with a time of 3 hours, 30 minutes, 19 seconds. She also won that marathon in 2010 and 2011. The last competition Dick took part in was a sponsored Eco-Friendly run in November 2019.

She also took part in many international races. For a long time, she was accompanied by top male long distance athlete Simon Labiche, who was also a member of the East Coast athletics club.

An emotional Labiche told SNA on Tuesday that when he learned about Dick's passing he was shocked.

"I knew she was sick but I thought she would overcome the illness. She went to India for treatment and when she came back she was worse than before and had to stop working and stay home. Then COVID came so I did not have the chance to visit her. We only talked through the phone or via texts," said Labiche.

He said that Dick and he were like brother and sister and that he has lost a friend who has marked a large part of his life.

"Many competitions I've done Simone was there with me. We were fighters and we looked after each other. There were competitions I took her with me like for a competition in Reunion where she competed for the first time and came out first. She was so happy," he added.

The Seychelles Athletics Federation said that Dick will be greatly missed as she was the top female athlete for long distances in Seychelles, an archipelago in the western Indian Ocean.

"For the time being, we don't see anyone who can compete at her level. We have one or two young athletes but not to the level of Simone. Those who are training do not have the motivation and determination like Simone who was constantly on the track training," said Antoinette Esparon, a member of the Federation.

This was echoed by Labiche who told SNA that "when I look at sports in Seychelles, Simone has left behind an empty hole. Since both Simone and I have been participating in competitions there has been no woman in Seychelles who could rub shoulders with her. She has left her mark behind and I don't know who will be able to achieve what she did."

Dick has left behind a husband and a seven-year-old daughter.