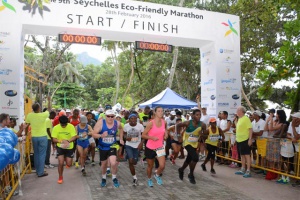 (Seychelles News Agency) - Kenyan Moses Mbugua and Frenchwoman Olivia Peytour are the grand winners of the Seychelles Eco-Friendly marathon in 2016.

Mbugua and Peytour beat the 48 other men and women attempting the annual 42 kilometre race on Sunday.

Peytour completed the challenge in 4 hours and 3 seconds, while Mbugua, who completely dominated the marathon, made it in 3 hours, 31 minutes and18 seconds. Both were making their second appearance in the marathon.

“It was very difficult, but I tried to win today because I did a lot of practice in the morning,” Moses, who is currently working in Seychelles, told SNA, adding that he was happy to have won, although he did encounter some leg pains along the way.

Mbugua has improved on his third place finish in the marathon last year.

The Seychelles Eco-Friendly marathon was initiated in 2008 by the Seychelles honorary consul general in South Korea, Dong Chang Jeong, as part of efforts to encourage people in the 115-island archipelago in the western Indian Ocean to stay healthy. It has now become an annual event that attracts locals and foreigners working or holidaying in Seychelles, as well as foreign participants who come expressly for the marathon.

A total of 50 men and women took on the challenge to run the ninth edition of the annual marathon this year, while 3,200 others took part in the other categories, which include the half marathon (21 kilometres) or the shorter 5 and 10 kilometre races, with many opting to either run or walk the 5 km course.

Sunday morning’s weather was perfect for the race with the clouds masking the intensity of the hot sun, allowing the participants to get a good workout with minimal risk of sunburn.

Jointly organised by the Seychelles National Sports Council and the Seychelles Tourism Board, the event kicked-off at the popular Beau Vallon beach in the north of the main island, Mahé.

Starting at 7am, the longest route saw participants running down the northern coast districts of Beau Vallon, Glacis, Anse Etoile, down to the capital, Victoria, then to Roche Caiman, a district on the outskirts of Victoria and back the same way, to finish the race at Beau Vallon.

Stewart Bicknose a UK national who just moved to Seychelles in January, told SNA that he really had a good time in spite of the hot weather.

“My wife and I did the 10 km marathon and it was great. For sure we will be back again next year and maybe attempt the half marathon, we will train for that,” said Bicknose.

While foreigners dominated the full marathon, Seychellois Iven Moise did his country proud as he conquered the half marathon, clocking 1 hour 20 minutes 06 seconds, ahead of a Czech national and another Kenyan participant.

Not feeling very tired after the race, Moise told SNA that he is confident he can do better with more training.

“It’s been raining a lot recently and the terrains were a bit slippery, so I missed a few training sessions. I did not expect to win because I was running to better my time, which I did, so now I can train to do better,” Moses told SNA.

The annual Eco-Friendly marathon continues to attract more people. About 330 people participated in the first run in 2008. Participants totalled 3,250 from 51 different countries this year.