A musician in Seychelles uses bottle caps to create a mural, sprucing up an eyesore 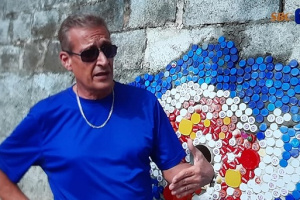 Gilles Lionnet said he found a new wall at his home at Mare Anglaise to be an eyesore and he looked online for inspiration. (SBC Tremolo)

(Seychelles News Agency) - A musician in Seychelles is covering an exterior wall at his home with a seascape mural made out of bottle caps, cleaning the environment of discarded waste and adding a touch of island beauty to his neighbourhood.

Gilles Lionnet, who is also known by his stage name of El Manager,  said he found a new wall at his home at Mare Anglaise - a sub-district in the north of the main island of Mahe - to be an eyesore and he looked online for inspiration.

"On the internet, I saw that somebody had decorated a wall using this and I said that is the idea," explained Lionnet, who said he immediately linked with people in his community who were collecting pet bottles to recycle for their caps. According to Lionnet the tops are bought or even exchanged all in the recycling effort.

"The tops have a long life span and their colours takes a long time to fade. Maybe in ten years, the time they will need a fresh coat of paint," explained El Manager, who has the environment protection of the islands close to heart.

Lionnet, who is credited with creating "Mougae" – a fusion between Moutya, the traditional music of the Seychelles, and reggae from Jamaica -- has in the past composed around seven songs singing environment protection and conservation.

Lionnet explained that the first part of the mural is an underwater scene showcasing corals, fishes and the centrepiece an octopus. Music will be a part of the second part of the mural, where he hopes to illustrate some traditional musical instruments such as zez and bonm.

The task of making the mural involves plastering the wall with cement and then adding the tops to create the mural, the colours of the tops vary from blue representing the sea, green for seagrass, white for the octopus and orange for the clownfish and corals.

Working on the artwork is teamwork and Lionnet is joined by his sons and friends. Delroy Lionnet said the project is removing a lot of tops and plastic from the environment. "It will become very beautiful and we would have removed many bottle tops from the environment because it is a big wall," added the son.

Sheldon Larue, who is also helping with the family project, added that working on the mural gives him something else to do instead of just being idle.

El Manager is happy with his contribution to the environment of Seychelles – 115 islands in the western Indian Ocean. When the project is complete,  Lionnet said he is hoping to have used up to 1 million tops, helping to save the pristine environment of the island nation. Lionnet hopes that this practice can be replicated in the wider community.