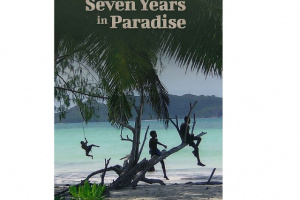 Through her book, Kathy recounts the story of the organization, the Bible teaching and the establishment of the pottery industry (Seychelles News Agency)

A South African national who helped set up a pottery centre in Seychelles in the 1970s has written a book about her days on the island nation.
In the book, “Our Seven Years in Paradise,” Kathy de Smidt recounts how she and others from her group contributed to the setting up of the Ceramics Training Centre and the Seychelles Potters Co-operative.
De Smidt, who currently lives in Cape Town, told SNA that she first came to the islands in 1977. “Our Christian mission organization was invited to consider working in Seychelles, be involved in Bible teaching in numerous spheres and support the ongoing work of other churches on the island. One of the main things we were asked to do was to provide training in pottery for young people after they left school,” explained de Smidt.
De Smidt, who contacted SNA after an article about pottery was published by the agency recently, said that her organization - the Voluntary Service Group – established upon arrival an agreement with the Ministry for Education and set up the first-ever training centre specifically for pottery.
“Once potters were trained after a couple of years, they would then set up a craft industry, which became known as Seychelles Potters Co-operative, SeyPot, based at Les Mamelles,” explained de Smidt.
Through her book, the author recounts the story of the organization, the Bible teaching and the establishment of the pottery industry. Back then pottery was booming in Seychelles – 115 islands in the western Indian Ocean – and was sought-after by the tourism sector.
“My husband, Brian, and I with our young son arrived in 1978, from South Africa. We came to assist with the training centre and in particular to set up the SeyPot, once the first potters were trained. In early 1979, the training centre opened its doors to the first students, and the first graduates in April 1981 were Mickey Arnephy, Kathleen Jeremie, Rodney Payet, Sarah Esparon, Jeanette Esparon and Linda Chang-Sam,” explained the author.
De Smidt added “we loved living in Seychelles, and in fact, that is why I have called my book, ‘Our Seven Years in Paradise’. It was a wonderful place to bring up our children and we made many good friends on the Island. Two of our children were born at Victoria Hospital. We lived in Pointe La Rue and also at Anse Aux Pins and had some interesting experiences there. Our family arrived in late July 1978 and we left in August 1985.”
Upon the opening of the Seychelles Polytechnic – an academic institution – in the 1980s, the centre was absorbed in the Art and Design department of the institution.
At the end of September 1988, the opening of the retail shop in Les Mamelles marked the point when the volunteer group completely withdrew from the pottery project, handing over the running of SeyPot to the Seychellois potters. After that,  SeyPot was run by Seychellois potters for quite some years, and some potters set up their own workshops including Mickey Arnephy who still owns his pottery workshop.
“I am the only one left now amongst the first trainees and for me, the biggest satisfaction with pottery is how the mound of clay can be transformed into beautiful products using your hands and the pottery mill,” Arnephy told SNA.
The potter said he remembered clearly when American Jack Wilson, Stanley Kline along with Brian De Smidt started the centre which was located in the central district of Mont Fleuri. The building – now delipidated – where the training centre was, still stands today.
Arnephy added that he wishes that this form of art gets the recognition it deserves and his hope is that a center for training is re-opened as he is prepared to train young people in pottery.
De Smidt's book is on sale on Amazon and costs $4 for Kindle and $33 for paperback.