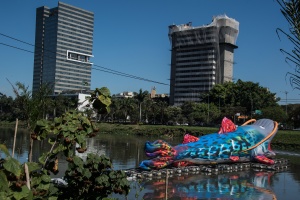 A giant mock plastic fish is seen in the highly polluted waters of the Pinheiros River as part of an art installation by Brazilian artist Eduardo Srur to warn on environmental issues and fluvial pollution, in Sao Paulo, Brazil on August 24, 2017.
(NELSON ALMEIDA / AFP)

(AFP) - The Brazilian government backed off a controversial proposal to authorize private companies to mine a sprawling Amazon reserve Monday after blistering domestic and international criticism.

President Michel Temer's office will issue a new decree Tuesday that "restores the conditions of the area, according to the document that instituted the reserve in 1984," the Ministry of Mines and Energy said in a statement.

Last week, environmental activist group Greenpeace said at least 14 illegal mines and eight clandestine landing strips were already being used by miners in the Denmark-sized reserve known as Renca in the eastern Amazon.

Greenpeace said this showed the risks faced by Renca even without Temer's earlier proposal for ending a ban on large-scale foreign mining in the mineral-rich region.

Temer's decree signed on August 25 on opening up Renca -- rich in gold, manganese, iron and copper -- was suspended days later after an international outcry.

The president had argued that lifting restrictions would allow Brazil to boost its struggling economy and also push the hugely destructive illegal mining operations out of business.

In announcing the government was formally withdrawing the decree, the mining ministry insisted that the conditions that led to the measure in the first place were "still present."

"The country needs to grow and generate jobs, attract investments for the mining sector, including to exploit the economic potential of the region," it added.

The rainforest has a wealth of valuable commodities but has been protected for decades from private industry and is home to several indigenous tribes.

Critics of Temer's decree included international environmental groups, the Catholic Church and even supermodel Gisele Bundchen, who is Brazilian.

The Renca reserve is home to the indigenous Aparai, Wayana and Wajapi tribes and vast swaths of untouched forest, covering more than 17,800 square miles (46,000 square kilometers).

Environmental groups say opening up Renca, part of the "world's lung," to mining would accelerate the advance of private mining and deforestation of preserved areas.

"The cancellation of the degree shows that, no matter how bad it is, no governing politician is absolutely immune to public pressure," said Marcio Astrini, public policy coordinator for Greenpeace Brazil.

"It is a victory of society over those who want to destroy and sell our forest."

He added: "Renca is just a battle. The war against the Amazon and its different peoples, promoted by Temer and big agribusiness, is still on."

Since taking power in 2016 after the impeachment of his leftist predecessor Dilma Rousseff, Temer has taken a series of controversial environmental measures, including reducing the size of a natural sanctuary and freezing the cession of property titles to indigenous people.

At the United Nations last week, Temer told the General Assembly that Brazil plays a leading role in environmental protection.

"Brazil is proud to have the largest coverage of tropical forests on the planet. Deforestation is an issue that concerns us, especially in the Amazon. To this issue we have dedicated attention and resources," he said.

But following a recent meeting of more than 1,000 environmental scientists in Brazil, the head of the Society for Ecological Restoration told AFP that the international scientific community has "deep concern" about the country's environmental policies under Temer.