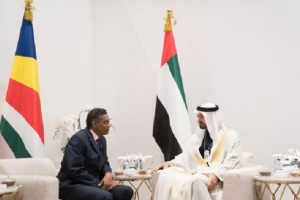 On Monday, Faure held bilateral talks with the Crown Prince of Abu Dhabi on areas of continued co-operation between the two countries. (State House)

The announcement came during a visit by President Danny Faure of Seychelles to the UAE's National Rehabilitation Centre.

According to State House, the cooperation and assistance from UAE will include the training of Seychellois personnel who will staff the Seychelles' Rehabilitation Centre once it opens.

At the launching of the Seychelles National Drug Control Master Plan 2019-2023 in December, Faure said that in line with plans to rehabilitate addicts, a modern rehabilitation centre initially to be built at Cap Ternay will now be built at Bon Espoir, Montagne Posee. The centre will be financed by the United Arab Emirates government at a cost of $3.6 million.

The head of state of Seychelles, an archipelago in the western Indian Ocean, visited UAE's National Rehabilitation Centre which is an accredited institution with the United Nations World Health Organisation. The centre also provides strategy and policy advice to several countries in the Middle East and Africa.

State House said that the compound houses the centre's administrative arm, premises to allow for the administration of approximately 600 out-patients, rooms to cater for 200 in-patients, a state of the art laboratory for advanced testing of various types of drugs, and several other services.

On Monday, Faure attended the official inauguration of the Abu Dhabi Sustainability Week in Abu Dhabi by the Crown Prince Mohamed bin Zayed Al Nahyan in the presence of several heads of state.

The Abu Dhabi Sustainability Week is a global platform for accelerating the world's sustainable development, particularly in the areas of energy, water, and waste.  The event was inaugurated Abu Dhabi's, Crown Prince Mohamed bin Zayed Al Nahyan in the presence of several other Heads of State.

After the inauguration, Faure held bilateral talks with the Crown Prince of Abu Dhabi on areas of continued co-operation between the two countries.

Following his participation at the World Future Energy summit in Abu Dhabi, Faure will proceed on a two-day state visit at the invitation of the King of Bahrain, Hamad Bin Isa Al Khalifa, as part of efforts to further strengthen the long-standing excellent bilateral ties between the two nations.