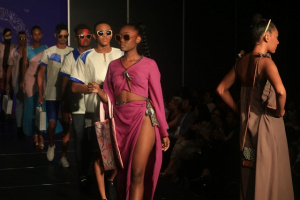 Fifty Seychellois models alongside 10 of their international counterparts are participating in the second edition of the Seychelles Fashion Week. (Joe Laurence, Seychelles News Agency)

(Seychelles News Agency) - Seychelles Fashion Week is a great way to gain confidence on the catwalk and get more international exposure through foreign designers, media houses and instructors, a local model said.

Fifty Seychellois models alongside 10 of their international counterparts are participating in the second edition of the Seychelles Fashion Week, which kicked off November 25. The models are showing off the designs of 26 designers from Seychelles, the United States, Indonesia, Nigeria, Qatar, Malawi, Guyana, South Africa, India, Congo, Senegal, Namibia and Botswana, all with different levels of accomplishment in the fashion industry.

One of the local models, Jade Jules, said that the event "gave models like myself great training from internationals instructors as well as exposure on an international level through the media houses, designers and trainers present."

"The fashion show was really exciting with a great variety of collections and quite a good representation of both genders," Jules told SNA on Friday night during the first day of the fashion show.

As a model taking part in the Seychelles Fashion Week for the second time, he added that great progress has been made compared to last year, particularly with the organisation of the event.

"We as models, we feel much more comfortable. On the designers' part, there are new ones as well as those who are taking part for the second time, all coming with unique collections," added Jade.

The seven-day event started with three days of workshops, boot camp training and business forum for models, make-up artists and the public. This was followed by fittings and catwalk training on the fourth day.

On Friday, the first group of designers showcased their attires at the Eden Bleu Hotel, hosted by local radio presenter, Sylvie Ah-time, and television host and model, Bettinah Tianah.

Qatar-based designer Romeo Paul opened the first day of the fashion show with his mixed collection of formal and casual wear with some touches of African print and some contemporary attires.

"My collections are mixed because it is not concentrated on a particular group of people. It is something that everybody, every culture, and religion can identify to them. In some, I added a flavour of the African print because the African print is going universal right now and I am trying to send a message out there, that the African print, being universal, can be used for whatever design no matter your culture, religion, race or colour," said Paul.

"I am trying to unite the world and Africa through fashion," he added.

A spectator at the event, Julia Gedeon, said that "the fashion show was excellent as in all the designers who showcased their work today brought their own creativity and they all did a great job, especially the local designers."

Gedeon was particularly impressed by the collection of two local designers - Aniella Chetty and Johanna Didon. Chetty is a young budding designer, age 16, with Johanna being a much more established designer having taken part in international fashion weeks with her brand 'Katiti'.

"As a person who follows fashion, it was about time that Seychelles has its own fashion week; it was a great initiative," said Gedeon.

Another attendee at the fashion show, Mursianne Ahkong, said that the event was well organised.

"The event was really well organised and I look forward to the second day. I came to support my boyfriend with his brand 'Cedarwear'. I hadn't seen his collection yet and having seen it on the catwalk, I was amazed," said Ahkong.