UK High Commissioner: Seychelles can be at forefront of global efforts to fight ocean pollution 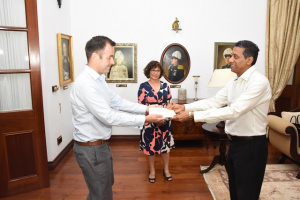 Patrick Lynch, the British High Commissioner to Seychelles, made this statement after presenting his credentials to President Danny Faure on Friday at State House.

Discussions touched upon areas that the two countries are already working on such as maritime security, the Blue Economy and democracy development.

“It is my first day on the job. I am consuming a lot of information. I am looking forward to promoting our shared values. A lot of work has already been done on democracy, the rule of law and protection of human rights,” said Lynch.

The Blue Economy, which Seychelles, a group of 115 islands in the western Indian Ocean, is seen as a champion of, was also discussed.

“I think on those issues Seychelles can very much be at the forefront of the global effort. By that we are also talking about controlling plastic in the ocean and ensuring that enterprises in the ocean are sustainable in order to also reduce the impact of climate change,” said the new High Commissioner.

He added that “we have discussed ongoing areas of mutual cooperation. As I said on a UK perspective Seychelles is much more than beautiful islands. There are a lot of initiatives going on here that are of mutual interest.”

Speaking on the impact of Brexit on Seychelles, Lynch said that it will be positive.

“Our relationship with Europe is all about onward looking, but also focusing on countries around the world that we have strong ties with and that very much includes the Seychelles,” said Lynch.

The British High Commissioner is replacing Caron Rӧhsler who is taking up another post in the Maldives, another country located in the Indian Ocean.

Bilateral relations between the two countries have been established since Seychelles became a crown colony separate from Mauritius in 1903, and independence was granted in 1976.