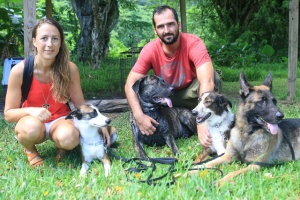 File photo: Melanie, said in a press conference that there is a regulation that limits the number of dogs to five per household or per plot of land. (Joe Laurence)

(Seychelles News Agency) - Seychelles is getting ready to roll out phase one of the Control and Protection of Dogs Act 2018, set to come into effect January 1, officials announced on Tuesday.

Phase one of the implementation will include the registration of dogs and dog owners. This will allow the National Biosecurity Agency (NBA), the authority mandated to implement the legislation, to know how many dogs there are on each plot of land.

The chief veterinary officer of Agency's veterinary service, Jimmy Melanie, said in a press conference that there is a regulation that limits the number of dogs to five per household or per plot of land.

“The law covers eight parts including the preliminary, the authority appointed to deal with the matters, responsibility of dog-owners as the law places the regulatory-responsibility on dog-owners. One part pertains to registration, nuisance associated with dogs, importation,” said Melanie.

“We are making the announcement today to give the public enough time to prepare for the rolling out of the law,” said Melanie.

He added that the public is not being asked to abandon unwanted dogs or those that exceed the set limit, as this is an offence under the law.

“If for a reason or another an owner has an unwanted dog, there are facilities to which they can hand over the dog to and have them rehomed or fostered,” said Melanie.

To register a dog, the owner needs to fill out a registration form which will be available in their respective district. Following this, an appointment to visit the dog’s home will be set and statements made within the form will be verified. The agency is working to make online registration possible in the future.

Registration will be opened throughout the year and will cost a dog-owner $3.70 (SCR50) to register a sterilised dog and $37 (SCR500) for an unsterilised dog.

“There are other fees for other types of registrations which will be covered under the next phase. This includes dog-breeders and boarding kennels,” clarified Melanie.

Each pet will be fitted with a microchip which will allow the agency to identifying any chipped dog found in the street. The cost of microchips will be relayed later.

On the importation of types of dogs, five breeds - the Japanese tosa, pitbull, Staffordshire terrier, Argentinean dogo and American pitbull – have been banned. They are considered as dangerous and are not suitable to be kept as pets.

The principal veterinary officer of the veterinary services, Joel Malulu, said that the Agency has set criteria "for us to categorise dogs as dangerous.”

“There are procedures for dogs which are considered dangerous but that are already being kept as pets and that we are satisfied that they do not exhibit dangerous behaviour and on condition that a dog-owner takes responsibility to keep their dogs away from the public,” said Malulu.

For the next five months, the agency will be carrying out educational campaigns and outreach programmes to inform the public on the developments and regulations. Each month a different part of the law will be explained in detail.