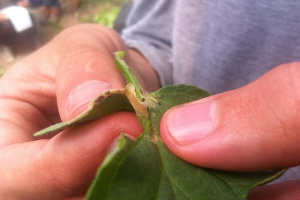 The ban was imposed late last month to curb the spread of the tomato leaf miner (Tuta Absoluta) which was found on all three islands. (Astronatas, Wikimedia) Photo License: CC BY-SA 4.0

(Seychelles News Agency) - Farmers on the Seychelles' three main islands are asking the National Biosecurity Agency to lift a ban imposed on the movement of tomatoes between Mahe, Praslin and La Digue as sales are being severely affected.

The ban was imposed late last month to curb the spread of the tomato leaf miner (Tuta Absoluta) which was found on all three main islands of the archipelago in the western Indian Ocean.

The Seychelles National Biosecurity Agency told SNA on Thursday that discussions are being held on the next step.

Randy Stravens, the principal bio-security officer, said that the decision was taken in order to allow the Agency to carry out the eradication plan in a controlled manner and to reduce the spread of the pest.

"We understand that any measures in place will not satisfy everyone, but it had to be done. We have had farmers that have proposed even more drastic measures, but we understand the livelihoods depend on the production of tomatoes and so we had to take a sensible decision, to allow producers to sell the tomatoes only on their respective islands," he added.

Farms on Praslin and La Digue were recently visited by the Agricultural Producers' Association of Seychelles and the farmers expressed their concerns that sales are being severely affected and they have seen a reduction in the pest since then.

Basil Hoareau, owner of a farm on Praslin said that the Association "has really helped us as we have seen a big reduction in the pest on our farms."

He added that "despite being able to produce healthy tomatoes now, my sale has really suffered as the majority of my clients are on Mahe and because of the ban, I cannot sell most of them."

In a press conference on Tuesday, the chairman of the Association, Barry Nourrice, said that the ban on the movement of tomatoes between the islands is not the solution.

He added that "when other fruits and vegetables arrive in the country from overseas, there are inspections done to ensure that they are not carrying any diseases, why can't the same be done to tomatoes moving from one island to the other?"

The tomato leaf miner, which originated from South America, is a highly destructive insect that can ruin tomato and other crop plants of the nightshade family, including potato, eggplant, pepino, pepper and tobacco.

The insect can spread rapidly as it has a high reproduction rate and can lay up to 250 eggs.