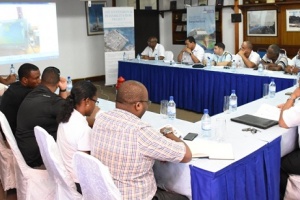 The authorities and the owner of the vessel met to discuss the operation to remove the vessel stuck on the reef in the Ste Anne Marine Park. (Seychelles Nation)

(Seychelles News Agency) - Authorities are waiting for a tide of at least 1.7 metres to start an operation to remove a foreign fishing vessel ran aground on a reef, said an officer from the Seychelles Port Authority.

The Kenyan-flagged vessel, Diamond Ace Number 1, went aground on the night of Friday, August 24 in the vicinity of Long and Cerf Island.

“There will be the need to have a tug to pull the vessel. Information that we have gathered will help us know where to tie the boat and place the tugs,” said Egbert Moustache, the deputy chief executive of the Seychelles Port Authority.

Moustache said that the Port Authority "will organise for divers to assess the damage to the vessel. For the time being we are not having high tides above 1.6 or 1.7 metres so it will still be risky, hence why we decided upon next week.”

He added that the operation has been postponed for Thursday, September 6 when the tide movements will be more favourable.

Communication held with the captain of the Kenyan vessel after the incident revealed that ‘Diamond Ace Number 1’ had holes in its hull, Moustache said. Photographic evidence gathered by officers from the Seychelles Coast Guard and the Anti-Narcotics Bureau has allowed the authority to assess the amount of water coming into the vessel.

Moustache said that he and his team have “learnt more about the types of pumps being used to remove the incoming water.”

“As the holes are in areas that are not very accessible we cannot tell how large the holes are and if there are any rocks still lodged in the vessel, which might damage the vessel further when we start the operation,” he added.

The representative of the owner of the vessel, Yakub Kassim, told the press that the vessel, which was bound for Mombasa, Kenya changed course as the crew encountered problems.

“Unfortunately, the vessel had some issues, and thus had to come to Seychelles. In the process, they started running out of fuel and the captain decided to come into port for rescue. He called for distress and when he was trying to come inside, that is when the problem happened,” said Kassim.

He added that “it is unfortunate that in the process we lost Captain Pierre" Grandcourt, who died in the incident.

Moustache said that the vessel was bought in South Korea and from there they went to Singapore to fuel up.

“They thought that the fuel would be enough to get them to Mombasa but when they reached Seychelles they realized that it wasn’t enough and that is when they started the procedure to come into port but they didn’t have authorization,” said Moustache.

Moustache said that the vessel had not received authorisation from the local port authority to dock in Seychelles. The authority is still waiting to question for the captain of the vessel so as to have the situation further clarified.

According to the representative of the boat owner the vessel was a new acquisition, used to catch crab.