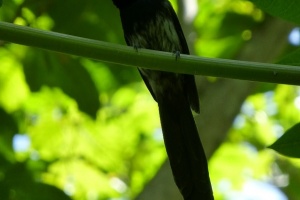 On La Digue, the birds have their habitat at the Veuve reserve at Anse Reunion. (Rachel Bristol)

(Seychelles News Agency) - A project in Seychelles aims to secure the long-term future of the Paradise Flycatcher -- locally known as Veuve -- endemic to the third-most populated island of La Digue by transferring the birds to other islands.

“The first translocation to Denis Island was very successful. We translocated 23 individuals in 2008 and there is now a population of over 85 individuals on the island and the numbers are still increasing,” Bristol told SNA.

Bristol said that “preparations are underway for a second translocation to Curieuse Island off the second most important island of Praslin.”

The Paradise Flycatchers are currently on International Union for Conservation of Nature’s  (IUCN) list of critically endangered species. On La Digue, the birds have their habitat at the Veuve reserve at Anse Reunion in the west of the island.

“There is continuous stress on the species as their main habitat is on La Digue. It is not to our advantage to have the population only on one site. The first transfer was a learning process for us. Ten years on we feel that we are ready for the next step,” said the director general for biodiversity conservation and management in the ministry for environment, Marie-May Muzungaile.

Muzungaille was speaking with SNA after the ministry had organised a public meeting with residents of the island. The meeting had a poor turn out, but the team will be forging ahead as the ministry wants the species to be removed from the critically endangered list.

“Gaining support and understanding of the La Digue community regarding the need for translocation as part of the Veuve conservation strategy, as many Diguois feel strongly that the Veuve is their special bird. However, we are really all on the same team as the main reason for translocation is to secure the long-term future of this special bird,” added Bristol.

Bristol said “making sure we minimise the stress on the birds during the actual transfer and then monitoring the birds intensively after the translocation is very important so we can detect any problems and mitigate.”

Curieuse has been chosen for the next reintroduction as it appears to have suitable habitat for flycatchers as this is the most important requirement. The island is protected as a National Park and it has open and free access to Seychellois 365 days a year. The island is managed by the Seychelles National Parks Authority.

“We know the birds will be OK with the actual physical transfer of catching and transporting the birds to Curieuse as they coped very well with the transfer to Denis, however, the challenge is always being prepared for the unexpected,” explained Bristol.

Bristol added that “we believe that the Veuve will do well on Curieuse otherwise we would not translocate there, however, we will monitor the birds closely post-translocation so that if there are any problems we will know about it and we can mitigate.”

According to Muzungaille “the Denis population is doing really well, they are breeding very well, we will be taking some of the birds from Denis along with some of the population from La Digue for the translocation. This is to ensure genetic diversity.”

The second transfer to Curieuse is expected to be done as soon as the rainy season starts in October or November, as this will ensure sufficient food for the birds in their new habitat.

The Darwin Initiative is a UK government grants scheme that helps to protect biodiversity and the natural environment through locally based projects worldwide.

In Seychelles -- an archipelago of 115 islands in the western Indian Ocean -- the project under its EDGE programme aims to provide incentives, investment and technical expertise to improve the conservation status of the Seychelles Flycatcher by restoring the species.