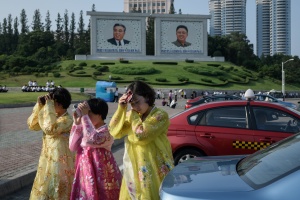 In this photo taken on July 27, 2018, women wearing traditional dress shield their faces from the sun as they cross a street in Pyongyang. North Korea on August 2 warned its people of "unprecedented" heatwaves that hit the peninsula and urged efforts to save crops against drought that may hamper food production at the impoverished country. (Ed JONES / AFP)

(AFP) - North Korea on Thursday warned that an "unprecedented" heatwave has caused heavy damage to crops as it urged citizens to "join the struggle" to prevent drought-like conditions from worsening and hampering food production in the impoverished country.

The Korean peninsula has been gripped by a scorching heatwave in recent weeks, with dozens of deaths in the South blamed on soaring temperatures that have hit all-time highs.

The temperature in North Korea's capital Pyongyang climbed to a record high of 37.8 degrees Celsius on Wednesday, with state TV warning that it was "taking a toll on the economy".

It did not elaborate on the scale of the damage.

But the rising temperatures have already inflicted heavy losses on the richer South, which has reported more than three million deaths of livestock and a fivefold increase in deaths from heat-related illnesses, while vegetable prices have doubled due to supplies being affected.

The North's state-run Rodong newspaper on Thursday said that curbing further damage to the agriculture sector was an "extremely important and urgent task".

"Rural areas across the country... are reporting damages to crops including rice and corn due to extremely high temperatures and drought," it said in an editorial.

"Today's reality is calling for every single individual across the country to join the struggle to contain the damages stemming from high temperature and drought," it said, urging citizens to "display their patriotic zeal" and "save every single dollop of water".

"This year's high temperature is an unprecedented natural disaster but it is not an insurmountable difficulty," it added.

The North has a fragile economy and has been frequently condemned by the international community for decades of prioritising its military and banned nuclear weapons programme over adequately providing for its people.

It has also been slapped with UN sanctions over its nuclear and missile tests, with the restrictions remaining in place despite an ongoing diplomatic rapprochement that has seen the North's leader Kim Jong Un hold a landmark summit with US President Donald Trump.

The country has periodically been hit by famine, and hundreds of thousands of people died -- estimates range into millions -- in the mid-1990s.

The food situation has improved in recent years however, partly due to reforms in agriculture and increasing trade at state-sanctioned private markets that have cropped up nationwide.

But the nation remains vulnerable to natural disasters including flood and drought due to chronic lack of infrastructure, deforestation and decades of state mismanagement.