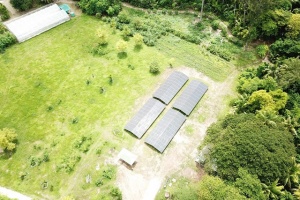 The solar energy project was implemented in partnership with local company Sun Tech together with the DHYBRID Universal Power Platform. (DHYBRID)

(Seychelles News Agency) - Denis Private Island has implemented the first phase of a four-phase photovoltaic solar power system in a bid to reduce the island’s dependency on fossil fuels. With the installation of the photovoltaic panels, the island is reducing its diesel consumption by 100 litres per day.

In an interview featured in the St Ange tourism report, Denis Private Island owner Mickey Mason said: “While most photo-voltaic projects feed power back into a public energy grid, primarily because there is no grid, the challenges on Denis are considerably different.”

“The entire operation on the remote island – a 30-minute flight from the main island of Mahé – has had to be powered independently with its own diesel generators, making the switch to renewable energy a more complicated affair,” said Mason, adding that in collaboration with the German company DHYBRID the project has materialized.

DHYBRID specializes in designing total energy solutions in remote places and has carried out successful projects in Somaliland, South Sudan, Haiti and the Maldives.

Denis Island is the second northeasternmost island in Seychelles – a group of 115 islands in the western Indian Ocean. It is 60 kilometres north of the main island of Mahé and lies at the northern edge of the Seychelles bank, along with the nearby Bird Island, which is the northernmost Seychelles Island.

The island has been designated a cay, a small, low-elevation, a sandy island on the surface of a coral reef.

The solar energy project was implemented in partnership with local company Sun Tech Seychelles. The first phase saw the installation of a 104 kW solar array, together with the DHYBRID Universal Power Platform (UPP), which will serve as the foundation for the current and future integration of solar energy on the island.

Future plans to use more renewable energy will include an upgrade of Denis’ existing diesel generators, before the implementation of modern lithium-ion battery energy storage systems is put in place. This will replace the need for generators altogether.

DHYBRID chief technology officer Tobias Reiner said: “With the universal power platform in place, the island has an energy roadmap towards 100 percent renewable.”

“Denis Island is a beautiful and unique destination and we are very proud that our technology is now supporting the ambitious vision of the island towards a green and sustainable energy supply,” said Reiner said.

According to Reiner “Denis Island is a role model in sustainability and we hope that this installation will set a further example to other islands in Seychelles.”

“We’ve always known that in keeping with our mission for not just a sustainable hotel but a sustainable and self-dependent island, we would have to address the issue of power,” Denis Private Island owner Mason said.

“However, for us, it’s not as simple as putting a few panels on the roof. If we’re going to do it right, we had to have a structure that would allow us to gradually shift toward the new technology without disrupting our existing operations,” concluded Mason.

Denis Private Island as a tourism establishment is a leader in conservation and sustainability.  The waters around the island have been designated as protected areas by the island nation government.

Apart from conservation programmes, the island’s overall administration places a lot of emphasis on sustainability, to reduce wastage and maximise what the island provides.

The island has an organic farm which supplies the resort with vegetables, fruits, meat and meat products as well as other products such as bread, milk, yoghurt, and cheese. Denis Island’ “farm fresh” products are also sold in its retail shop at Providence on Mahe.