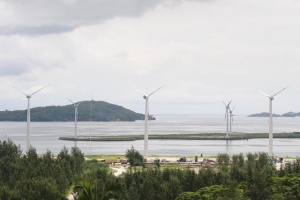 The five wind turbines at Ile de Romainville and three at Ile du Port provided by Abu Dhabi-based energy company Masdar as a grant from the government of the United Arab Emirates. (Patrick Joubert)

Two solar projects that will produce one and five megawatts of electricity are expected to be built on Romainville Island off the main island of Mahe, another step in Seychelles' plan to have 25 percent of its energy be from renewable sources by 2030.

The chief executive of the Public Utilities Corporation (PUC), Philippe Morin, told SNA last week that with the first project a one-megawatt solar farm will be installed on the manmade island, which already has five wind turbines on.

“This is a government project implemented through a $3.4 million grant from the Indian government. The one-megawatt solar farm is only one component of the project. In addition to this, there will be smaller units installed all over Mahe. This will be on public buildings as well as on private homes,” explained Morin.

The chief executive said “in all, there will be 3 units of 100 kilowatts, 10 units of 30 kilowatts which will be installed on government buildings. The 100 units of 3 kilowatts will be put on private premises and who will be the beneficiaries will be decided by the Agency for Social Protection as families being targeted are the less fortunate ones.”

Morin said that experts from India are already in the country. Materials for the farm and other units are expected to arrive in the island nation by September.

Seychelles – a group of 115 islands in the western Indian Ocean -- relies heavily on imported fossil fuel for power generation and transportation. Currently, only 2.5 percent of the island nation's electrical energy is from renewable sources.

“The second project to be implemented by PUC on Romainville Island is a five-megawatt solar photovoltaic system, through a loan of $8.5million,” said Morin, adding that the loan has been secured from Abu Dhabi and IRENA – the International Renewable Energy Agency.

“The loan agreement has been signed and now it is a matter of awarding the contract to the most competitive bidder and a decision will be taken shortly,” explained Morin.

In another national effort, stakeholders met last Tuesday at the International Centre of Seychelles in Victoria to discuss a proposal for Seychelles which will be submitted to the Green Climate Fund. The principal policy analyst for energy at the Ministry of Environment, Energy and Climate change, Theodore Marguerite said: “the proposal is for the implementation of the Seychelles 100 percent Renewable Energy Strategy.”

Marguerite said the meeting was to “explain the rationale of the proposal and of the strategy. As well as illustrating the current energy system of Seychelles.” This was done in collaboration with PUC and the Seychelles Energy Commission.

Marguerite said Seychelles is working on a proposal of $400 million to be submitted to the Green Climate Fund.  A process which started in 2016 and where Seychelles has been assisted by consultants from the Green Werk – climate advisory network based in Germany.

Stefan Wehner said “we are assisting with the strategy and with mobilising international climate finance. After preliminary studies, solar energy is the key source of renewable energy for the islands. PV panels can be installed as rooftops are also available. Wind is also another resource but in the end, a mix of technologies, the most cost-effective, will be considered for Seychelles.”

The chief executive of PUC said in preparation for the target to be achieved the electricity network must be reinforced. “PUC is reinforcing the grid all over Mahe. We have also to look at the stability of the power plant when in operations with a large amount of renewable energy contribution. This would imply looking at a system of battery storage.”

In the meantime, Cynthia Alexander of the Seychelles Energy Commission told SNA that the tender process for “a proposed floating Photovoltaic plant on the Le Rocher lagoon – in a sub-district on the east coast of Mahe - will open in July. The process will be open for both national and international companies.”