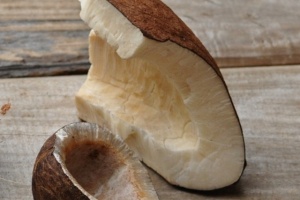 The ban on the exportation of coco de mer kernel was announced by the Seychelles’ President Danny Faure in his State of the Nation Address last year. (SIF)

(Seychelles News Agency) - Seychelles will soon start to export the coco de mer kernel as a value-added product now that three local companies have been given the approval to process the kernel. The Ministry of Energy, Environment and Climate Change said a fourth business is also expected to get its permit.

The director general for biodiversity conservation and management, Marie-May Muzungaile, told SNA that the three companies -- David Low Yoke of Willow Ventures, Island Scent and Bill &Co Pty Ltd - were successful following a call for proposals in May last year.

“The proposals were the ones which the selection committee felt that had given more value to the coco de mer kernel,” said Muzungaile.

Muzungaile said that two companies were already exporting the kernel before a ban was imposed, while the two others are new to the industry. “On top of that, they have come up with proposals which have research elements as well as the development of new products, in gastronomy and cosmetics amongst others.”

Samples of these products are expected to be available as of next month. Exportation will start soon after.

The Lodoicea, commonly known as coco de mer is the world’s biggest nut and is endemic to Seychelles – a group of islands in the western Indian Ocean.

It was in the State of the Nation Address, in February last year, that the President of the island nation, Danny Faure, announced a ban on the exportation of the coco de mer kernel. The ban came into force on March 1.

The Seychelles' environment ministry had the task of drafting a legal framework to regulate the new coco de mer kernel processing industry.

“We had to relook at the old coco de mer policy. We had to add not only on the kernel but we had to add more on the coco de mer itself. Looking more into the research aspects. Aspects of value addition, more value to a national resource. We also had to put a lot of effort into replanting of the species to ensure its sustainability,” explained Muzungaille.

The policy was brought before, and approved by the Seychelles’ Cabinet of Ministers in August last year.

The director general said, “the policy basically says an enabling environment will be created to allow the development of the kernel industry so that the benefits can be reap as well as access and benefit sharing of this national resource.”

The coco de mer is already listed as threatened by the International Union for Conservation of Nature (IUCN). Amendments were made to the coco de mer management decree in 2015 with new provisions on offences and penalties.

Muzungaile said that the ministry will be monitoring the companies to ensure compliance.

“We gave them a contract, with what we called milestones. After each milestone, there will be periodic reporting allowing us to provide checks and ensure that policy and guidelines are respected,” explain Muzungaile. “Also under the contract, we have also negotiated the companies’ royalties which they will have to pay the government on revenues made.”

Once the processing industries are fully operational, money collected will be used to revive the Praslin Development Fund - based on the second most populated island of Praslin - while more coco de mer trees will be planted to ensure its sustainability.


Tags: State of the Nation Address, Cabinet of Ministers, International Union for Conservation of Nature