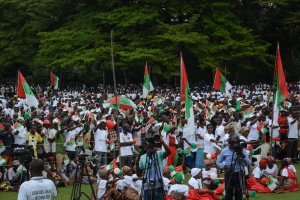 Supporters of Burundi’s ruling CNDD-FDD party gather during their last campaign for the referendum for a constitutional amendment in Bujumbura on May 14, 2018.
The referendum for the constitutional amendment which allows the incumbent President Pierre Nkurunziza, a 54-year-old former rebel leader who has ruled since 2005 to remain for another 16 years in power, is scheduled for May 17, 2018. (STR / AFP)

Election commission chief Pierre-Claver Ndayicariye said 73 percent of voters had voted "Yes" in a referendum last Thursday, which the opposition and rights groups said took place in a climate of fear and repression.

Only 19 percent voted "No" in the vote which scored a turnout of 96 percent. Spoiled ballots made up four percent of votes cast.

The results -- which exclude figures from the diaspora representing 0.27 percent of the vote -- are provisional and must be validated by the constitutional court within nine days.

Observers had widely expected the reforms to pass, partly due to support Nkurunziza still holds in rural areas, but also due to a three-year crackdown on dissent, the media and civil society.

A presidential decree ruled earlier this month that anyone advising voters to boycott the vote risked up to three years in jail.

Nkurunziza, 54, who has been in power since 2005, plunged his tiny east African nation into crisis in 2015 when he circumvented a constitutional two-term limit, arguing his first term came after an election by parliament.

The move sparked angry protests, a government crackdown, coup attempt and widespread abuses which prompted the International Criminal Court to launch a probe into the atrocities.

This angered Burundi which became the first country to withdraw from the ICC.

The constitutional reforms, which include measures that hand more power to Nkurunziza and his ruling CNDD-FDD, change term limits to seven years, meaning he could start again from scratch in 2020.

The United States on Monday denounced the "climate of fear and intimidation" and "lack of transparency" it said had marred the referendum and questioned the results.

"The May 17 referendum process in Burundi was marred by a lack of transparency, the suspension of media outlets, and attempts to pressure voters," the US State Department said in a statement.

- 'Neither free nor transparent' -

The massive turnout bolstered the legitimacy of the vote, however rights groups and the opposition argue it is fear and intimidation which drove Burundians to the polls.

"The electoral process has been neither free nor transparent, nor independent and still less democratic," former rebel leader and main opposition chief Agathon Rwasa said in a statement Saturday.

Rights groups agreed that the vote had been mired in intimidation, with Nkurunziza himself warning those who dared "sabotage" plans to revise the constitution would be crossing a "red line."

HRW said it had documented "15 killings, six rapes used as punishment against those seen as against the (ruling) CNDD-FDD, eight abductions, and numerous other violations."

The watchdog said that with fear preventing the report of abuses, the real figures were likely much higher.

Bujumbura routinely rejects such accusations, accusing foreign NGOs, rights groups and media of peddling a campaign of lies against the government.

Presidential advisor Willy Nyamitwe said these groups were "embarked on a campaign to tarnish the image of Burundi", in an interview with Kenya's KTN News over the weekend.

He said the country was "at peace", blaming violence on elements crossing the border from Rwanda or the Democratic Republic of Congo.

Aside from intimidation, the opposition also accused the government of rigging the vote, with the "Yes" vote winning even in opposition strongholds where the ruling party has never won an election.

Critics say the referendum has struck a death blow to the Arusha peace deal, signed in 2000.

The accord ended Burundi's 1993-2006 civil war and ushered in measures to ensure power would not be concentrated in either the hands of the majority Hutu or minority Tutsi, after decades of violence between the communities.

Nkurunziza is the latest in a long line of African leaders to tweak the constitution in order to stay in power, along with Rwanda's Paul Kagame, Uganda's Yoweri Museveni, Cameroon's Paul Biya and others.