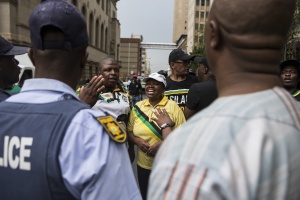 African National Congress (ANC) supporters are held back by the South African Police Service outside Luthuli House in Johannesburg. South African President Cyril Ramaphosa has cut short his participation in the Commonwealth summit in Britain to tackle violent demonstrations at home, his office said, in one of the first major challenges of his new presidency.(WIKUS DE WET / AFP

(AFP) - South African President Cyril Ramaphosa has cut short his participation in the Commonwealth summit in Britain to tackle violent demonstrations at home, his office said, in one of the first major challenges of his new presidency.

Ramaphosa, who took office in February with promises to jump-start the economy and stamp out graft, expressed "grave concern" over unrest in North West province and reports of clashes between police and protesters, according to a statement published on the president's website Thursday.

"President Ramaphosa has called for calm and adherence to the rule of law in the province and has called on all aggrieved parties to express their grievances through peaceful means and engagement rather than violence and anarchy," the statement said.

It added that the South African leader had urged security forces to "exercise maximum restraint".

Television images aired by the SABC state broadcaster showed thick smoke rising into the air near the site of the unrest in and around the provincial capital Mahikeng, while crowds of protesters looted shops in the area.

The broadcaster said one person was thought to have died in the demonstrations.

Police have reportedly used tear gas and rubber bullets to try and quell the protests, which erupted this week over jobs, housing and corruption.

Ramaphosa had been attending the Commonwealth Heads of Government Meeting in London where he was leading a government delegation this week.

Born out of the former British empire, the voluntary organisation of 53 member states covering a third of the world's population typically focuses on development and democracy, but is this year placing greater attention on boosting trade.

Ramaphosa, who took over as leader of the ruling African National Congress in December, replaced Jacob Zuma as South Africa's leader earlier this year.