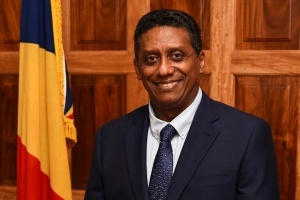 (Seychelles News Agency) - President Danny Faure of Seychelles has sent a message of congratulation to Xi Jingping who has been reappointed as President of China, a communiqué from State House said on Sunday.

China’s legislature approved the reappointment of Xi Jinping as president on Saturday with no limit on the number of terms he can serve. Xi was also reappointed as head of the government commission that commands the military.

In his message, Faure noted China's international role as a visionary beacon of world peace and in becoming a reliable defender of globalisation and climate change issues.

“The One Belt, One Road initiative, in particular, reflects China's determined willingness to play a more important role to improve the infrastructure for facilitation of world trade and integration,” said Faure in his message.

On the relations between Seychelles and China, Faure said, “The strong historical bonds between our two countries have taken our bilateral cooperation to new heights and deepened our people to people relations. In this regard, I would like to express our deep appreciation for all the support shown to Seychelles over the years."

Bilateral relations between the two countries have existed since 1976 and China has financed several projects in Seychelles. This includes the construction and completion of the primary school of Glacis and Baie Lazare, the Palais de Justice which houses the Judiciary and the National Assembly building among other projects.

Last October, the island nation in the western Indian Ocean, signed an Economic and Technical Cooperation agreement with China. The grant of $7.3 million provided under the agreement will go towards the construction of a new post-secondary school for commerce and visual arts at Anse Royale, a southern district on Mahe.

Another project sponsored by the Chinese government is the construction of the Seychelles Broadcasting Corporation House under a $15 million grant signed in August 2016.