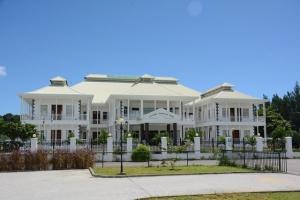 (Seychelles News Agency) - The two leaders in the National Assembly of Seychelles on Friday responded to the State of the Nation address made by President Danny Faure on Tuesday.

The Leader of the Opposition, Wavel Ramkalawan, said that certain announcements made during the speech were purely political.

In regards to the highly talked about agreement between Seychelles and India to build military facilities on Assumption, Ramkalawan pronounced that “all MNA's of ‘Linyon Demokratik Seselwa’ (LDS) and their advisors have agreed that we will not ratify the agreement as is.”

“LDS believes that Seychelles should have a facility for our coast guard to patrol our southwestern territory and as an Assembly, we will support this part of the budget. This falls in line with our vision, that all efforts should be placed in the development of our coast guard,” said Ramkalawan.

Responding to the president’s plan to build two tunnels on Mahe, the leader said that the over $57.8 million outlined as required to complete the projects should be used to tackle more urgent problems in the country.

“This money can be used to rebuild all the roads on Mahe, Praslin and La Digue, something that is necessary today,” said Ramkalawan.

He added that the people of Seychelles would rather have the government invest this kind of money in a modern and specialised hospital rather than having to travel to Chennai (India) for medical treatments.

“Seychellois would rather see more investment in photovoltaic plants to reduce the cost of electricity. They want to see projects that will bring down the cost of living and Seychellois wants to see the construction of houses,” he continued.

On the cost of living, the Leader of the Opposition said that official visits made to Kenya, Ethiopia, Mauritius, Sri Lanka and India are not yet bearing any fruits. He added that the Seychelles Trading Company (STC) should move away from giving the people a shopping experience to giving them cheaper goods.

“Did you know that every month STC Hypermarket pays over $72,306 in terms of electricity and $289,226 in terms of rent? We propose that STC should close the hypermarket and sell merchandise on a wholesale basis,” he said.

Ramkalawan suggested that the focus of the government is shifted to other social ills affecting the country such as the failing education system, drug trafficking and abuse, poverty, delinquency and crime among many others.

“It is high time for the government to be brave, take bold decisions and move to the stage of action. We should not be fearful. I am tired of putting forward propositions on certain actions that need to be taken and the government doesn't do anything and the blame is later placed on the cohabitation,” said Ramkalawan.

In his response, the Leader of Government Business, Charles Decommarmond, said that the proposed reclamation of land in five areas is the best solution so far to reduce demand for land.

The areas to be reclaimed include the area around Ile Hodoul close to Victoria, the capital, an extension of the reclaimed island Ile Aurore close to the northern district of Anse Etoile, the industrial estate area at Providence and Roche Caiman along the eastern coast and Grand Anse Praslin.

The Leader of Government Business talked about the importance of the tourism sector, the first pillar of Seychelles’ economy.

He said that there should be more activities to revive the capital of Victoria and at the district level to attract and engage visitors and that “this will encourage them to spend more.”

As this industry remains fragile Decoomarmond said: “we need to stop several malpractices such as thieving, noise and aggression against visitors.”

Commenting on the government’s decision to sell shares in the Seychelles Petroleum Company (SEYPEC), Decommarmond proposed that a legal financial instrument is set up to help people especially young who want to buy shares but do not have the money to do so.

On the ease of doing business, Deccomarmond said, “We need to continuously find ways to facilitate the existing procedures. Banks should also play an active role in terms of the accessibility of loans.”

The Leader of Government Business welcomed the suggestion of the President for a national dialogue on alternative ways to finance health.

“I am also asking for the same dialogue to be done with private clinics to find ways on how they can help in drug rehabilitation,” he said.

He added that although the government has adopted good measures to bring down the cost of living, people are not feeling it.

Seychelles has done a lot to improve the social and economic aspect but Decommarmond said there are existing and new challenges that need to be tackled as a country.