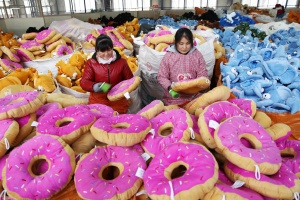 This picture taken on January 8, 2018 shows Chinese employees making toys for export at a factory in Lianyungang in east China's Jiangsu province. China's factory inflation slowed to a 13-month low in December 2017, official data showed on January 10, a sign of continued fragility in the world's second largest economy.(AFP)

(AFP) - The global unemployment rate is expected to tick down in 2018, the United Nations said Monday, while warning that far too many workers still live in desperate poverty.

The International Labour Organization forecast a worldwide unemployment rate of 5.5 percent this year, a marginal improvement on the 5.6 percent recorded in 2017, thanks to broad economic growth.

But in its flagship "World Employment and Social Outlook" trends report, the ILO also raised serious red flags about the health of the planet's labour market.

"Even though global unemployment has stabilised, decent work deficits remain widespread: the global economy is still not creating enough jobs", the organisation's director-general, Guy Ryder, said in a statement.

A key problem is the abundance of "vulnerable employment", a category that includes informal work arrangements with little or no social and contractual protections.

"The significant progress achieved in the past in reducing vulnerable employment has essentially stalled since 2012", the ILO said in a statement.

The problem is most acute in the developing world, where three out of every four workers have a "vulnerable" employment status, the report said.

The study's lead author, ILO economist Stephan Kuhn, pointed out that 40 percent of all employed people in the developing world still live in "extreme poverty".

Uneven economic growth and the huge concentration of global wealth in the hands of very few is expected to be a key topic at the World Economic Forum's annual meeting in Davos, which opens on Tuesday.

The charity group Oxfam reported Monday that 82 percent of the wealth created in 2017 was controlled by the world's richest one percent.

"Additional efforts need to be put in place to ensure that the gains of growth are shared equitably", he said.